Streets of Afghanistan, an interview with Shannon Galpin – The Joy Trip Project

19 Nov Streets of Afghanistan, an interview with Shannon Galpin – The Joy Trip Project 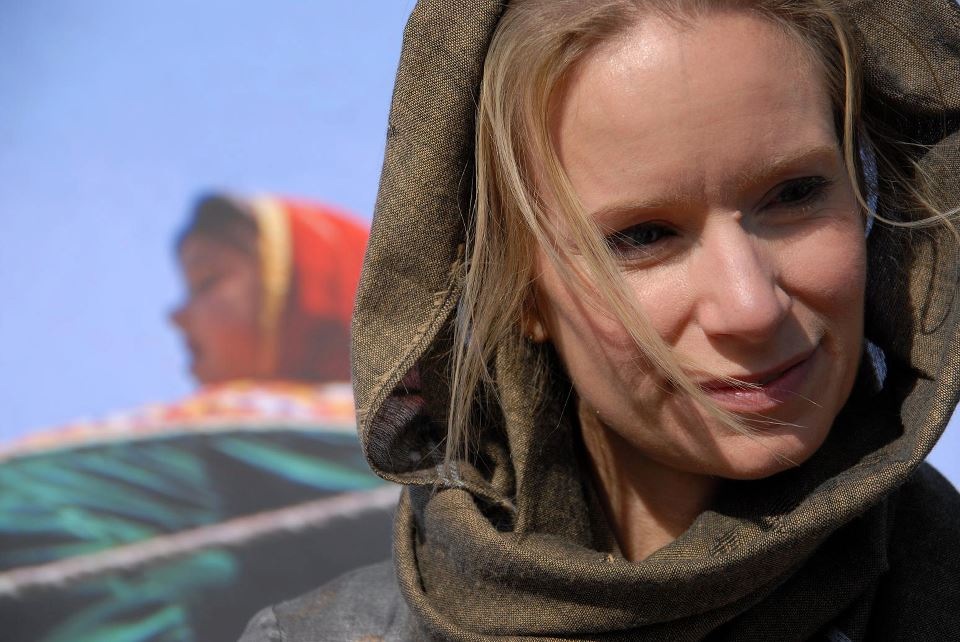 Shannon Galpin is one of ten 2013 Adventurers of the Year. Vote every day for the People’s Choice!
On her most recent trip to Afghanistan in late October, human rights advocate Shannon Galpin returned a bit of the nation’s own culture. In a series of life-size photographs, the Colorado resident delivered artistic expressions of the Afghan people so often shrouded behind the vail of 40 years of conflict. Working to improve the health and safety of women and girls, Galpin, director of the nonprofit Mountain2Mountain, aims to provide a positive vision of beauty to contradict the violent images that typically come to mind whenever we think of Central Asia.

With a small team of photographers and filmmakers, Galpin set up in the city of Kabul an exhibition called the “Streets of Afghanistan.”  Shots taken by photographers that include Tony Di Zinno, Beth Wald, Paula Bronstein, Najibullah Musafer, and others make up a traveling display that can now be seen by the very people it depicts. Honored as one of our ten 2013 Adventurers of the Year, Galpin led a unique expedition into a region still plagued by terrorists’ bombs. Shortly after completing the first installation at the Darlumon Palace Galpin shared her thoughts on the project.

Photograph courtesy Tony Di Zinno
James Edward Mills: What do you hope to accomplish with the “Streets of Afghanistan” exhibition?
Shannon Galpin: The goal was, first, to bring the images that capture the beauty and spirit of this country back to Afghanistan to show among the Afghans themselves in a series of exhibitions that are outside in the streets and public places. It’s a chance for the Afghans to appreciate art and perhaps instill some pride in the beauty and soul of their country.
Second, I wanted to show the world that you can do things like this in a country like Afghanistan. That art, and street art in particular, isn’t off limits because of ongoing conflict—in fact its perhaps even more important to inspire, ignite conversation, and instill pride and a sense of community.
Just because its a war zone where daily violence occurs doesn’t mean its not also a country of real people going about their daily lives. The view we get in the media of Afghanistan—of war and conflict and poverty isn’t the story of this place—its simply the backdrop on which all the stories occur.

Photograph courtesy Tony Di Zinno
J.E.M.: What were some of the challenges you faced in making this project happen?
S.G.: The biggest challenge is funding—the broken record of raising funds to pay for the enormous costs of production for life-size photographs is huge. But these images begged to be big—a gallery-size print wasn’t going to engage the viewer in the same way. I wanted a street-art public installation, not a gallery exhibit. It was also logistically and financially challenging to get the exhibition to Afghanistan. Twenty-nine bags to be driven to Denver airport in three trucks, enormous baggage fees to be paid, and the hope that all 29 bags would arrive through three airports and two flight cancellations on the other side at Kabul. Our duct tape was confiscated in Dubai, and the Kabul customs agents tried to get me to pay a “tax.” But hey, I knew it wouldn’t be a cakewalk.
J.E.M.: Have you encountered or do you expect any opposition to your exhibition? Are you in any danger?
S.G.: No opposition yet, just occasional issues that come up with local police. The municipality of Kabul, essentially the Kabul Mayor’s office, has thrown their support behind this, and that gives it a lot of weight for our public exhibitions in Kabul. We are also speaking with the Kabul police chief to explain what we are up to and get his support. In terms of danger—yes, it’s Afghanistan, and I don’t take anything for granted.

Photograph courtesy Tony Di Zinno
J.E.M.: What do you want people here in the U.S. to know about your work and why it’s important?
S.G.: The founding ethos of Mountain2Mountain five years ago was based on the idea connecting communities and cultures—and photography is a powerful way to do that. I hope that people back home realize that change is possible in a country that many have written off. That Afghanistan is more than what we see in the media, that it is beautiful, and its citizens have hope and the same wishes for their lives and families that we do. We cannot turn our attention away from a country if we can connect to its people and their spirit. We are more similar than we are different.
This story originally appeared on the National Geographic Adventure Magazine blog Beyond The Edge on November 13, 2012