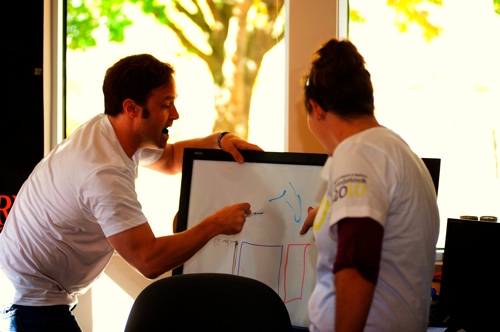 For almost six years the ad firm Knupp, Watson & Wallman has provided free marketing and advertising assistance to non-profits throughout Dane County. In an annual 24-hour marathon event called Goodstock, the company rallies its staff of creatives to develop top quality, high impact promotional materials to boost the good work of charitable organizations in need. Having developed a program that successfully leverages the philanthropic power of publicity KW2’s Goodstock is now being duplicated by other ad firms in the U.S. and Canada.
“We’ve had a lot fun doing this over the years and with so many of our key staff members still with us, we’ve developed a bit of system,” said president and executive creative director Andy Wallman. “So when other firms come to us wanting to learn how we do it we just hand them a bunch of electronic documents we can deliver to be basically a turnkey package.”
Since Goodstock first began in 2004 Wallman said KW2 has extended about $1.4 million, around $280K a year, in advertising goods and services to more than 40 capital region charities. Powered by caffeine and a sincere desire to give back, the staff at KW2 works around the clock to churn out everything from promotional fliers and business cards to short ad spots for both commercial radio and television. They’ll even build interactive web sites or design social media viral marketing campaigns. Whatever the client needs, all in a flurry of energetic expression.
“This tends to fit into the culture of most ad agencies,” said KW2 client services director Jennifer Savino . “We’ll feed the creative teams Red Bull all night and they’re pumped up. It’s the way we work already.”
Despite the quick turnaround time at Goodstock KW2 can still create the best quality advertising money can buy.
“The work that we’re creating is getting out into the market. It’s getting used strategically and tactically,” Wallman said. “The execution of the thinking is getting used by our non-profits right away. We haven’t heard that the 24-hour brevity is hurting anything.”
And as it turns out other firms that share KW2’s generous spirit have adopted the Goodstock model.
“We used the same logo, the same name, everything,” said Judi Wax of the North Carolina-based ad firm Luquire George Andrews, Inc. “Agencies get asked all the time to do pro-bono work. But this was a way to generate some excitement and enthusiasm among our stuff and pride in what we do. It’s a lot of fun.”
Ad agencies by nature are highly territorial and competitive. But when it comes to Goodstock many are prepared to lay their differences aside and work together. Morgan Cartier of the firm Harvey McKinnon Associates in Vancouver, British Columbia said KW2 made it easy to bring Goodstock to Canada.
“It really wasn’t too hard to replicate it in our own way while still keeping to the spirit of the original event,” he said. “Everyone wants to do this kind of good work. We’ve actually been approached by local agencies here in Vancouver saying that they’d like to be part of it too.”
Goodstock events help to create teamwork and a great sense of cooperative purpose within the firms who participate. But of course the primary benefactors are the non-profits they serve.
Sharyl Kato is the executive director of the Rainbow Project. In 2009 her organization participated in Goodstock.
“We’re a counseling and resource clinic working with young children and families who experience trauma,” she said. “That includes child abuse, neglect and domestic violence, as well as other kinds of trauma like natural disasters, grief and loss, physical illness, mental illness. We run the full gambit.”
With 30 years on the job Kato can very effectively manage the support and care of the most vulnerable members of our community. But when it comes to getting the word out on the work performed by the professionals at the Rainbow Project Goodstock provided the assistance she needed most.
“It was a learning experience to watch the pros do it. I was energized by the creativity and how they worked together,” she said. “Anyone would benefit from that. It’s definitely given us a boost.”
Working directly with non-profits to determine their advertising needs through Goodstock creative professionals help to define and showcase the outstanding qualities that make these organizations effective providers of community service. Jenny Czerkas, the director of the River Food Pantry, also participated in the 2009 Goodstock and learned some value lessons in the art of marketing her organization.
“It something that we really didn’t know much about and we weren’t sure how to start,” she said. “We learned how to consider our audience and who we wanted to promote ourselves to, how to target our mailings and get our message out to the right people. It may seem like ‘Marketing 101’ to others, but we didn’t know to do that.”
The River Food Pantry also received marketing collateral that included a radio ad, a poster and new logo, all courtesy of Goodstock. And as other ad firms embrace this model of community involvement Andy Wallman at KW2said he’s pleased to see the idea is catching on.
“It just shows you the power of good communication. But what we’re most jacked-up about is helping Madison and helping Dane County,” he said.  “In the five years of doing this, 40 or so non-profits, 150 projects, you can literally look at a map a draw circles around pockets of Dane County that have been helped. You’ll find a lot of those circles overlap and you’ll see a lot of people who have been helped by Goodstock.”
This story originally appeared in the November 2010 issue of the Capital Region Business Journal‘s corporate philanthropy feature Good Works