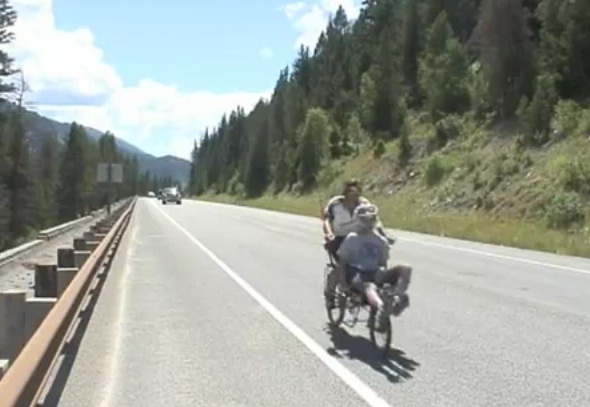 I’m hitting the road today making my way back across the plains and prairies to Wisconsin. I’m pretty psyched to get moving on several new projects that gained some serious traction over the last few days. So it’s good to be heading home. But this morning I woke up to an exciting email that announced the post of a new video from my friend adventure filmmaker Dominic Gill. (Give a listen to my podcast interview with him recorded last year at the Banff Mountain Film Festival>> Take A Seat). He’s making his way cross Wyoming and South Dakota on a tandem hybrid up-right recumbent bicycle on course for an incredible experience.  In his first documentary feature Take A Seat, Dom road a tandem bicycle from Alaska to Argentina. For two years on his 22,000-mile trek across two continents he invited total strangers to ride along on the back seat of his bicycle built for two. And as I write this he’s currently cycling across the United States traveling from California to New York on a similar expedition, but this time all of his riding partners are exclusively people with a disability.
I’ve been following along on Dom’s adventure since he left my hometown of Los Angeles in early July. He’s ridden so far with a blind man, a person with traumatic brain injury and a recovering quadriplegic with only limited use of his legs. With Dom’s help these individuals are taking a trip of a lifetime that they would otherwise be unable to do by themselves. But it was his latest rider, a man with muscular dystrophy, who needed my help.
Chad Woodbury’s condition makes it difficult for him to breath at night. He has sleep apnea and requires a machine powered by electricity to assist his respiratory system so he can get the rest he needs. Because he and Dom are camping through most of their journey it’s not always possible to plug in Chad’s device so it will function at night while he’s sleeping. So Dom had the bright idea of acquiring a solar charging device to store electricity in batteries during the day while making their way to their next goal Rapid City, South Dakota.
Through Facebook Dom contacted me and asked if I knew of any companies that make solar power arrays who might be willing to donate the equipment necessary to charge Chad’s machine. I immediately thought of Goal-0, a company based in Salt Lake City, where Dom just happened to be at the time, who makes just the gear he was looking for. Even though Dom had a contact with the company I told him I’d send an email to their marketing manager and put in a good word for him.
All that was about two weeks ago now. Goal-0 made the donation. Dom and Chad were on their way. And I’d pretty much forgot about the exchange having moved on to other things as I was gearing up for a busy couple of days working the Outdoor Retailer Show. So I’m walking the aisles at the Salt Place in SLC and bump into my buddy Chris Meeks, the marketing guy at Goal-0. After we chat for a bit he says to me, “Thanks for your note about Dom. We got him everything he needs. You know hearing from you really helped because without your recommendation we might have passed.”
Watch this video and you’ll see the Goal-0 solar panels. Chad’s machine has the power to make it work. He and Dom are making their way through the Badlands of South Dakota and I’m really excited that in this small way the Joy Trip Project was able to make the difference in the successful progress of such a noble and exciting adventure.

You know sometimes I wonder if the work that I do here has value and realistically brings meaning to lives of those it’s my pleasure to connect with. So as my journey continues on this next leg of the trip after Outdoor Retailer I’m beginning with a new sense of hope and optimism for the prospects of bringing you more inspiring stories that touch my heart. Thanks for coming along!