Galileo puts your iPhone in Motion – The Joy Trip Project 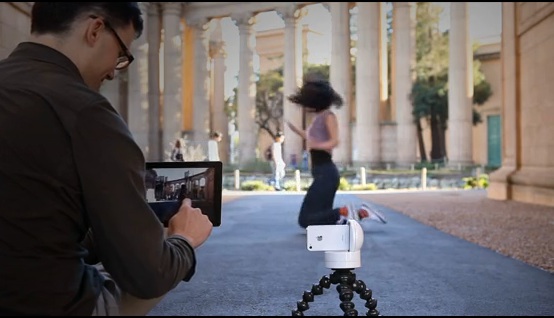 Cameras built into the latest iPhones offer incredible resolution. Taking high quality photographs and videos has never been easier. But a new product being promoted on Kickstarter offers a very cool bit of technology to remotely control your iOS devise and make something great even better. The Galileo attaches to your phone and tripod so that users can rotate, pan and zoom the camera wirelessly. Cutting down on shaky images common to handhelds this compact gadget can be guided nearby or over the Internet from anywhere on the globe using a second iPhone or an iPad.
Creator Josh Guyot said the Galileo is perfect for photographers shooting adventure media. “It’s not just film makers but outdoors people who don’t want to carry around a lot of photo equipment to shoot panorama or time lapse,” he said in a phone interview. “This is something that people can really gravitate toward.”

The Galileo shattered its Kickstarter fundraising goal to pull in more $170,000 above the original ask. Backers apparently love the idea and look forward to having a devise of their own.
“I think they just like the simplicity of the potential, Guyot said. They’ve already embraced the iPhone. Now they can get some great functionality in their favorite apps using Galileo.”
Those contributing at a certain level on Kickstarter will get first dibs at a discounted price with the Galileo ships in June 2012. Guyot says it will be available at select retail stores later this summer with a suggested price of $129.
About as weather-resistant as the iPhone itself the current version of the Galileo can’t be used under extreme wet conditions. But Guyot said more rugged models are under development. Mounts are available for the popular GoPro action cameras. So eventually better outdoor applications will be possible. In the meantime Guyot hopes independent software developers start dreaming up new ways to get the most out of his new invention.

Cool on Kickstarter is a new feature that profiles innovative and exciting projects in progress. If you know about an inspiring fundraising initiative, expedition, film or invention that aims to make the world a better place, improves the lives of others or is simply cool please share it. Drop me a note at info@joytripproject.com
The Joy Trip Project is made possible with the support of sponsor Patagonia