The first morning of the new year my wife Shamane and I spent working out at our local health club. Now that we finally have almost two feet of snow on the ground it’s a shame we couldn’t go skiing. All the trails around Madison are groomed to perfection and one friend said the cross-country corduroy nearby at Mirror Lake State Park was “like riding a magic carpet”. But four weeks after surgery for a partial knee replacement Shamane is in re-hab. Whether you’re addicted to backwoods ski excursions or crystal meth it’s the best thing for you really. Taking time off to heal and build strength is the only way to assure your fitness in the future for adventures yet to come.

Dutiful husband that I am over the last month I’ve been close to home playing nursemaid. With my travel schedule on hold through December I put in 28 days as chauffeur, head cook and bottle washer, while still working the phones and the computer generating stories for this and a few other blogs to which I contribute. Good work if you can get it. Believe me its worth it. Of course I love my wife dearly, but I also know that in just a few weeks time our roles will reversed. Last week I got the news that in early February I’m getting both my hips replaced.

It’s been a long time coming. I was first diagnosed with osteoarthritis in 2005. Pretty much at the very beginning of my career as a freelance writer I frankly wasn’t ready or able to take six to eight weeks to recover from major surgery. So I hobbled along season after season each year in more pain and less physically active than the last. Although 2012 was the best year of my professional life with extensive travel and adventure opportunities, because of the pain in my legs I wasn’t able to take full advantage of everything that Joy Trip Project Season 4 had to offer.

The year started off with an incredible honor from Outside Magazine. The Joy Trip Project was named one of top adventure-based Facebook pages on the Internet. That charged my enthusiasm and set the pace for several months of lifestyle journalism. Just as the ice came off the lakes in late winter I reported for the Wisconsin Public Radio Program “Wisconsin Life” on the first day of Stand Up Paddling. In celebration of Earth Day at the University of Wisconsin I hosted a screening of the film “Happy” and moderated a panel discussion on happiness with movie director Roko Belic, professor of psychology Richard Davison and environmental scientist John Francis. 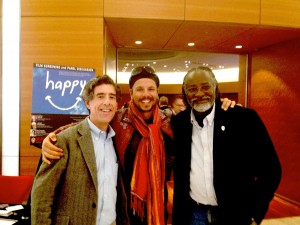 In April I traveled to Carbondale Colorado where I reported on the 5Point Film Festival. From there I went to Moab Utah where I spent the annular eclipse of 2012 with “Sketchy” Andy Lewis and his crew as they walked a spaceline highline route 800 feet off the ground over Mineral Bottom Canyon. 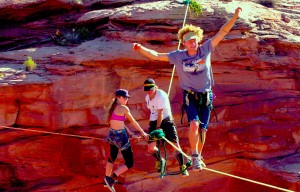 Heading further west I met in Lake Tahoe, California with the team for Expedition Denali, a group led by the National Outdoor Leadership School that aims to put the first majority African-American team of climbers on the summit of Denali. Discussing the importance of diversity in outdoor recreation I appeared in a segment of the Tavis Smiley Show on National Public Radio.

Continuing my long road trip in my VW Jetta TDI Wagon I call the Joy Ride I traveled to Yosemite, Joshua Tree, Grand Canyon and Arches National Parks. One of my photographs from Canyon View was published in the new book on the National Parks by Audrey Peterman entitled “Our True Nature”. Also a story I produced on a new tandem BASE jumping business run by Steph Davis and her husband Mario Richard near Moab was published in Elevation Outdoors Magazine. I finished up my western tour with a series of reports from the MountainFilm Festival in Telluride. My interview with climber and filmmaker Jimmy Chin appeared in the National Geographic Adventure blog “Beyond the Edge”. 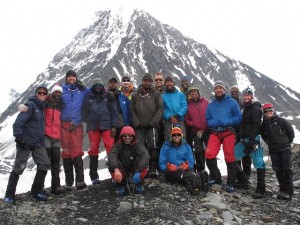 After a quiet month of June working at home I spent two weeks on the Mantanuska Glacier along the Chugach Mountain Range of Alaska with NOLS and the Expedition Denali Team. In August I curated two 90-minute programs of adventure movies during the Outdoor Retailer Summer Market. There I also attended the sneak preview of the climbing film series REEL Rock 7 where I interviewed filmmaker Peter Mortimer for National Geographic Adventure. After that I spent a week with NOLS in Washington State on a trip through the Cascade Range to successfully summit Mount Baker.

In September I produced another radio piece for Wisconsin Life on rock climbing at Devil’s Lake State Park. In October my feature story “Exploring the Adventure Gap” on racial diversity in mountaineering was published in the 40th edition of Alpinist Magazine. Also that month I attended the Adventure Film Festival in Boulder Colorado. My interview with festival director Amy Copp was also posted to National Geographic Adventure. And finally I traveled to Alberta, Canada for the Banff Mountain Film Festival where the Joy Trip Project is a media partner. My interview with Justin “Jonesy” Jones, adventurer and producer of the three-time festival award winning film “Crossing The Ice” made it to National Geographic as well. 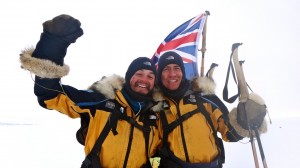 2012 was an incredible year. But in spite of everything I had accomplished I was pretty miserable throughout. The pain in my hips made it difficult for me to walk long distances and carry heavy loads. Glacier travel in Alaska with snowshoes was not only painful, but in hindsight knowing now how bad the damage is to my joints it was dangerous as we crossed several crevasse fields. Long nights in a sleeping bag left me cramped and achy with very little rest. Lack of flexibility made it tough for me to lace up big mountaineering boots or even slide on my socks. Putting on climbing shoes was almost impossible and even then I felt so unsteady on my feet the most simple routs in Yosemite and Joshua Tree got the best of me. I would have loved to try highlining with Andy or BASE jumping with Steph and Mario in Moab. Hikes to the top of Yosemite Falls and Delicate Arch damn near killed me and I was good for only a couple of miles along the rim of the Grand Canyon before I limped back to the car.

For a very long time now I’ve avoided even the idea having my hips replaced. I simply was afraid of missing out on all the adventures I get to enjoy as part of my profession as a journalist. But now I’ve come to realize that things will only get worse as I grow older unless I do something right now. For the past seven years I had falsely hoped that if worked hard at alternatives to surgery I could get better on my own.

To be honest I was a little afraid of the outcome. Though pretty common today seven years ago joint replacement for relatively young and athletic people was virtually unheard of. Doctors typically recommended holding off as long as possible before undergoing the removal of your femur head and having it swapped out with a metal prosthetic. Left as the last resort for older more sedentary patients candidates for a hip replacement were most often in their late sixties. Unfortunately many of these new joints failed after a number of years and often the procedure had to be repeated. Lucky for me times have changed.

New surgical techniques and refinement of the implants make for faster recovery and a high level of physical activity after surgery. Once my initial recovery is complete I should get back much of my strength and flexibility and most of all I’ll be pain free. I don’t have any expectations of being as physically fit as I was in my 20s. But I know that I can make better use of the active life I have left. I know this for certain because not only did Shamane recently get a new knee, two years ago she had her hip replaced and today she doesn’t even think about it.

So in 2013 I hope to continue the work I started in 2012. Though I expect to spend the rest of the winter house-bound and recovering from surgery I have several projects to keep me busy until I’m back on my feet. Along the way I aim to share a bit of information on the process of joint replacement and my experience building back to an active lifestyle. I hope to encourage those on the fence still contemplating surgery and those who have had it done to share their stories and suggestions for a positive outcome. Please drop me a note at info@joytripproject.com

Moving forward into the New Year The Joy Trip Project is adopting a proactive theme to celebrate the choices we make to live without limitations. My goal in 2013 is to devote my work in journalism to building enthusiasm for the idea that life is meant to be be lived out loud in a deliberate expression of defiance to doubt and fear. In 2013 I’ll continue to seek out and report on those athletes, artists and activists who push against the boundaries of their abilities to achieve the highest ambitions of outdoor recreation, environmental conservation, acts of charitable giving and practices of sustainable living. Welcome to The Joy Trip Project Season 5!

I hope you’ll come along for ride. ~JEM