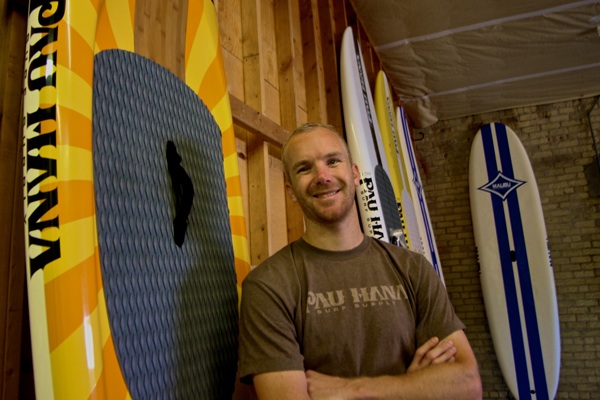 Rob Bossen of Silver Creek Paddle & Company
Based in Minneapolis, Minn., Silver Creek Paddling & Company delivers an exclusive assortment of Pau Hana Surf Supply standup paddle boards for racers, experienced fitness paddlers and those who are just starting out. In the middle of the country with paddling opportunities of all kinds, this little distribution center is helping to grow the sport in a big way.
Not far from the Mississippi River, owner Rob Bossen said he’s excited to help aspiring paddlers discover the waterways right in their own backyard. “The river in Minneapolis is beautiful,” he said. “It’s an under utilized resource and people don’t realize they live on a major highway.”
No kidding, an ambitious paddler can pilot an SUP down the Mississippi all the way to New Orleans, and from there to the Gulf of Mexico. In 2011 Bossen paddled a piece of the river with British adventurer Dave Cornthwaite during the SUP portion of his Expedition 1000 project that included a 4-digit stretch of the Big Muddy. In the “land of 10,000 lakes” Minnesota offers unlimited flat water for paddling with major touring opportunities nearby on Lake Superior. Just a few hours to the east is Wisconsin and, of course, Lake Michigan. So in the summer of 2010 Bossen struck up a relationship with Pau Hana’s co-owner and board shaper Todd Contranto.
SUP mag: What made you decide take the plunge into SUP?
Bossen:I started on a whim in a way. I always wanted to own my own company and so it was a matter of what’s a good match. When standup came along…it’s fun, it’s up and coming. At the time we were living on a lake west of Monticello, which is just about 60 miles west of (Minneapolis), and I thought ‘we can do this. We can get people out to the house and demo boards that way.’ But it was my wife who said, “You should just stop talking about starting a business and just do it.” That’s when I got in touch with Pau Hana and they said, “Sure, let’s give it a run.” And the rest was history.
SUP mag: So how did it go at first?
Bossen: We had a good first year. And then I wanted to take on more inventory. That’s how the distribution business started. I took more volume than I thought I could sell on my own and started to make some calls out to some local mom and pop outdoor retailers to see if they were interested in the standup paddle side of the business. I had a few people say, “Yeah, we’ll take some boards in.”
Out here we’re a little different than the rest of country. We’re Pau Hana’s only distributor. They have sales reps elsewhere and so I kind of handle the very upper Midwest here. I’m kind of their anomaly in the mix. I actually buy the inventory and store it here. All the shipping is out of here. But a lot of times I make my rounds and deliver boards myself. I get to visit with the dealers and make sure the boards get there in one piece.
SUP mag: What kind of volume are you doing here?
Bossen: We’re selling about 300 to 325 boards a year. I sell some direct out of here, but most of it is distribution. We’ll probably sell 60 or 70 boards here and the rest of it is distribution. It’s a good number, but I actually enjoy the distribution side just as much as selling direct.
SUP mag: You must do quite a bit of dealer development.
Bossen: Yeah, I go out to visit dealers at least once a year for some sort of demo event or training event and we’ll just talk about the line up and how it’s changed and evolved. It’s such a different line up than what it was even last year. Every year they’re better. Todd’s done a great job of design work and just turned out real well. Dealers are excited to carry the brand. We spend some time out on the water paddling, describing the differences. You get out on the boards and you can feel the differences right away, but just talking through how to position the board depending on what the consumer wants to do, whether for fitness, or if they’re looking for stability or just recreation, whatever they want to accomplish when they’re out on the board. We talk about that and then paddle sizing and all that good stuff as well. It all comes into play.

Silver Creek Paddle & Company’s Bossen family
SUP mag: So why Pau Hana? I imagine there are a couple of different companies you might have worked with instead.
Bossen: You’re right- there are a few companies we might have worked with. To be honest with you, some of it was just that they’re a small company too, which is one things that I appreciated, and they continue to be. The other thing is the boards have been coming out as designs evolve quickly and they’re doing a great job with that. Everybody’s tempted to see what else is out there. I kind of resisted that urge because it’s nice to stick with a brand that’s not super diverse. There are not 60 boards in the line-up. I know what each board is, how it fits in. And the other reason I’ve liked working with them is that because I’ve been with them for three years now I’ve been able to help with some of the product development side as well, which I think has been fun. They’ve taken my feedback and integrated some of that into the boards. It’s been fun working with a company that’s serious about innovative design and making sure that when somebody has feedback for them they actually listen and respond, which has been really, really cool.
SUP mag: When you’re working with Pau Hana in terms of development, is there anything that is Midwest-specific?
Bossen: I think so. Certainly the displacement boards are huge up here and I think they’ll continue to be. For flat water, unless you’re looking for a really, really stable ride, a lot of people want a little bit more speed out of the board. And because we’re not dealing with big swells you can go with a little less stable board here than you would anywhere else because you don’t necessarily have the variety of conditions. I think there are people who like the fact that you can get a good tracking board and get a little bit more speed out of it. So the development of their displacement hull line-up has been important for our market.
When I first started with them they had just planing hulls. Last year, the Cross-fit was the first board that came out with a displacement hull. Now they’ve got the RB-1 and the Mini-Sport, so that evolution will continue. Even with something like a touring board, a Cross-Fit that’s more touring capable will be the next iteration on that as well. Another thing I think you’ll see in the product evolution is increased durability. The epoxy boards are nice when you’re just dealing with sandy beaches and open water. But when you’re talking about up here, whether it be river or rocky lakeshore, something with a little more durability is what that I think is going to be really important. I think that Todd is working on trying to beef up the boards for our market as well.
— As told to James Mills
For more about Silver Creek Paddling & Company, visit: SilverCreekPaddle.com
This story originally appeared on December 5, 2012 in the Shop Talk feature at SUPTheMag.Com