Posted at 12:08h in Commentary by James Edward Mills 8 Comments 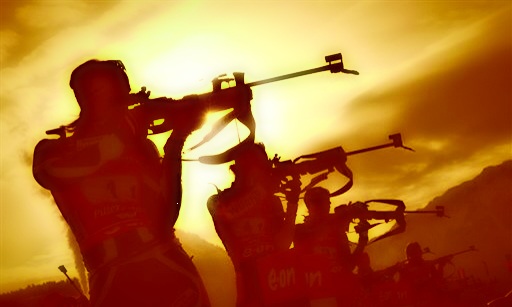 I used to be a card-carrying member of the National Rifle Association. Back when I was into projectile sports, archery and target shooting, I was required to take a gun safety course as a condition of eligibility for competition in biathlon. The NRA offered instruction for proper gun handling so I could run a short distance and then fire a .22 caliber rifle at targets in either a standing or prone position. I learned a few things about protecting those around me, not from some immanent threat of criminal violence, but from myself. After all I was the one running through the woods carrying a gun.
My career in biathlon lasted only one season. I competed in a single summertime event with little to show for it. On two sets of five targets I hit a total of three. Out of breath after a 5K run,hands shaking, heart racing, my pulse pounding in my ears I could barely pull the trigger, let alone aim straight or find the target. With little talent or promise of improvement I didn’t even make it until winter when cross-country skis make biathlon much more challenging.
Other activities piqued my interest. It was about that time I took up rock climbing. I let my NRA membership lapse, but my experience in biathlon left me impressed by one notion in particular. Even with training, under the pressure of stressful circumstances, a gun in my hands is at best unreliable and at worst a very dangerous thing. Despite my best intentions I might kill someone.
After the shooting deaths on Friday at Sandy Hook Elementary School in Newtown Connecticut I wasn’t sure exactly how I might respond. As a writer in the world of outdoor recreation my editorial scope is limited to those things that I’m qualified to discuss. But it’s hard to remain silent when 20 children between the ages of 5 and 7 are gunned down with their teachers in a classroom. My good friend climber and artist Jeremy Collins posted a dramatic illustration that depicts the emotions many of us likely feel after such a gut-wrenching occurrence. Part of his “Little Red Guy” series Collins’ iconic character sits weeping while he’s comforted by a sympathetic multitude. He shared the image on Facebook to more than 50,000 “likes”. 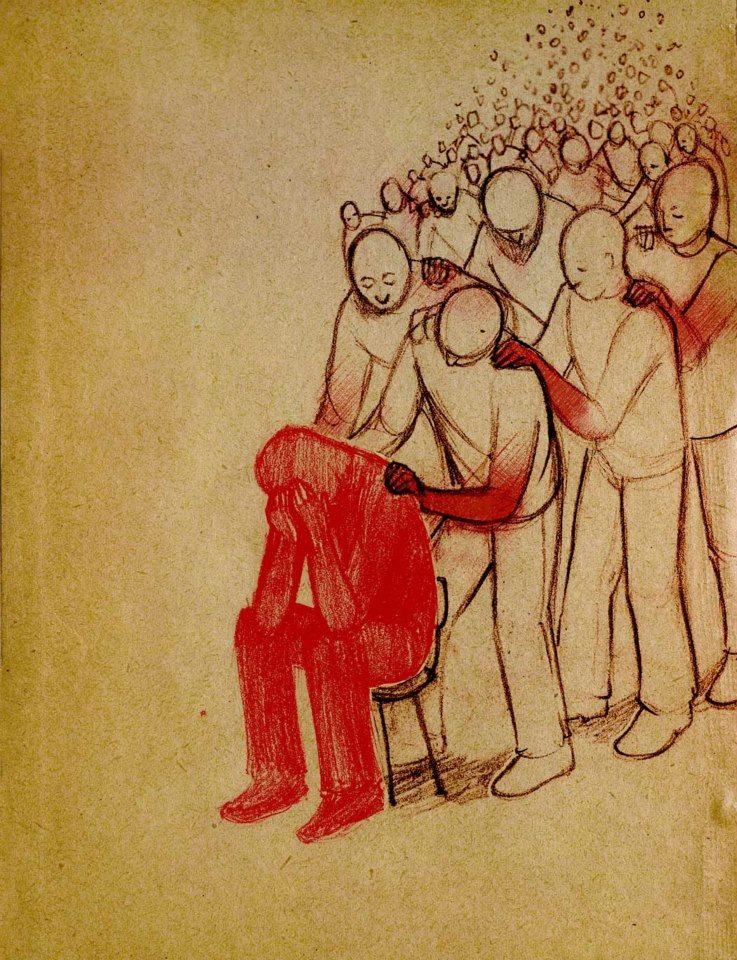 “Dude, did you just do this,” I wrote in an instant message. “Yes,” he replied. “Hard to draw through the tears.”
Moved to make a statement of my own I cast about trying to find an appropriate perspective in Joy Trip Project fashion. A story I saw posted to Salon.com on Sunday morning raised my ire. Larry Pratt, executive director of Gun Owners of America, responded to the tragedy saying, “Gun control supporters have the blood of little children on their hands. Federal and state laws combined to insure that no teacher, no administrator, no adult had a gun at the Newton school where the children were murdered. This tragedy underscores the urgency of getting rid of gun bans in school zones. The only thing accomplished by gun free zones is to insure that mass murderers can slay more before they are finally confronted by someone with a gun.”
My constitutional right to bare arms notwithstanding I sincerely doubt that I could have done much to prevent or even mitigate the death toll in this horrible event. I don’t think anyone could. Those kind of heroics happen only in the movies. Caught unawares in the heat of the moment with only seconds to react I would be more likely to injure an innocent bystander than a perpetrator and simply add to the body count. Hands shaking, heart racing, my pulse pounding in my ears I doubt that I could pull the trigger, let alone aim straight or find the target.
When was the last time an average citizen with a firearm stopped a violent crime from occurring? If advocates of the 2nd amendment like Pratt are to be believed lawfully owned weapons should be a ready deterrent against criminals and homicidal maniacs carrying guns. There are millions of hand guns out there meant for personal protection and recreational use. But these legally obtained pistols and rifles are also used to take innocent human lives. It’s time that we come to grips with this fact: all guns and the people who own them are presumed to kill.
No matter the intention of the user a gun is meant to cause harm. Whether you’re shooting a paper target, a competition ping plate, a deer or a human being you’re going to do some damage. The idiotic idea that guns don’t kill and people do is preposterous in light of the fact that a firearm will only discharge with a person’s finger on the trigger. That person needs to take responsibility for his or her actions as they manifest themselves as a speeding bullet. The moment a shot is fired the intention of the user becomes the intention of the gun. And when a person stands within its path to die that gun has killed.
If we presume even when used properly that guns will kill a rational system of regulation can be put in place to reduce the likelihood of violent death. Gun manufacturers in cooperation with law enforcement agencies could maintain an active database of all legally owned handguns in the United States. Gun sellers could be required to conduct a background check on gun purchasers along with a three-day waiting period. Gun sales could be restricted only to licensed gun dealers. All gun owners could be licensed and required to undergo safety training. That training could require recertification at regular intervals. And all gun owners could be required to have their weapons locked in a secure location in their home.
Though most gun advocates would object to much of what I propose alternative measures to curb gun related violence to date have failed. The argument that if guns are made difficult to obtain by law-abiding citizens only criminals will have them is an empty idea. Guns used in armed robberies and assaults in the U.S. are at an all-time low. And many gun deaths that have occurred in recent years, including those at Sandy Hook, have been caused by legally owned firearms.
While most gun owners are indeed responsible individuals better regulation of firearms could help to keep them out of the hands of those who aim to intentionally harm others. Regulation would do nothing to keep law-abiding citizens from owning guns but it might mandate better behavior on the part of those who would otherwise neglect common gun safety practices. My own brief experience as a biathlete clearly demonstrated to me the power and potential danger of a loaded weapon. Organizations like the NRA and Gun Owners of America should be at the forefront of firearm regulation. To assure the safety of their members and the general public gun advocacy groups must help to design and implement better policies to control the frequency of weapons fired in anger or desperation, guns that are presumed to kill.
Prints of Jeremy Collins’ illustration “Dear Parents at Sandy Hook” are available for purchase online. Visit: http://society6.com/jercollins/Dear-Parents-At-Sandy-Hook_Print
A portion of proceeds will be donated in support of the survivors.
The Joy Trip Project is made possible with the support sponsors Patagonia, Rayovac and the New Belgium Brewing Company