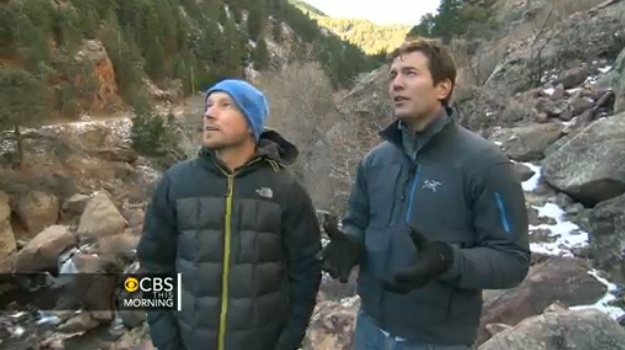 Whenever you deal with something everyday you’re bound to lose perspective. And chances are you’ll forget that not everyone is so intimately familiar with the subject matter that occupies much of your professional life. That’s why I’m always pleased to see major news organizations devote a few minutes of airtime to the relatively obscure topic of adventure media. Today the program CBS This Morning aired a short feature on Peter Mortimer and his work at Sender Films.

Likely tipped off by national news items that appeared in recent years the network has taken notice. High profile appearances of free-soloist Alex Honnold on 60 Minutes and highliner “Sketchy” Andy Lewis on the Superbowl have brought so-called extreme sports into the public eye along with the filmmakers and media producers who tell their stories. To the credit of CBS Mortimer and his crew, including partner Nick Rosen and Boulder pro rock climber Matt Segal, were portrayed as skilled professionals. In the past programs like this might have been framed with “don’t-try-this-at-home” warning labels and foolish interview questions that cast each subject in the role of ‘foolhardy numbskull with death wish.’

Instead this thoughtful presentation on CBS is a solid testament to how far adventure media has come in the cultural mainstream. Though we won’t likely see many more profiles such as this on the network news anytime soon I believe those that follow will finally receive the respect they deserve. As long as filmmakers like Mortimer and athletes such as Honnold and Lewis continue to ply their talents on the cutting edge of adventure with integrity they’ll continue to be perceived by the general public as the consummate professionals they truly are.