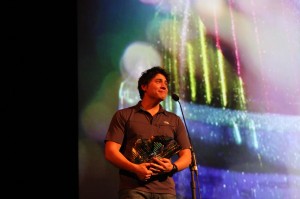 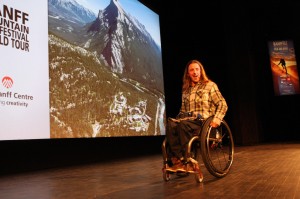 When Josh Dueck took the stage to host the Radical Reels screening at the 2012 Banff Mountain Film Festival he might have taken a few regular show-goers by surprise. I know I was. Most fans of the event likely expected to see the ever-energetic climber/comedian Timmy O’Neill bound out from behind the curtain to add his special brand of dirtbag humor to the mix of adrenalin charged movies. What they got instead was the slightly more subtle style of Dueck whose quick delivery and sly grin gave the audience a front row seat to an inside joke that everyone seemed more than welcome to share.
The star of last year’s film favorite “The Freedom Chair” Dueck took on the MC role with the same passion and skill he plies to the sport of slalom sit-skiing. Though bound to a wheelchair this paralympic silver medalist and National Geographic Adventurer of the Year commanded the attention of a raucous crowd captivated by his  quiet effervescence and natural charm.
“Josh really made the night his own- just like Timmy used to- and people embraced it,” said Rad Reels tour manager Meagan Stewart. “Josh and Timmy have a different style. They share a certain charisma and enthusiasm that our crowd looks for.”
And the crowd got what they were after. Over more than a week of festivities Banff delivered another exceptional program with a broad array of speakers, panel discussions, art installations, seminars and of course great films. At the very beginning of the winter adventure season the festival set a tone of excitement meant to, as the Banff Center’s motto proclaims, inspire creativity.

In the days that followed festival attendees were challenged to perhaps suspend their notions of what’s possible and expand their minds to embrace new ideas. On one panel, for example, the audience was made to rethink their perception of what is the Best Mountain Book Ever Written. Panelist Geoff Powter, recipient of this year’s Summit of Excellence award, suggests that a reader must experience a climbing adventure through the perspective of the author when in lesser books a second person account of the mountain fails to reveal the transformational journey of the characters involved. And in his presentation on the pitfalls of insatiable growth and development renowned environmentalist Dr. David Suzuki warns that when the economy is made to supersede the environment the resulting crash will devastate the ecology of the planet far more than the stock market. 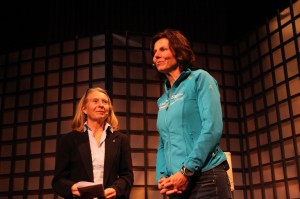 A full calendar each day of one great speaker after the next punctuated the festival with highlights of fascinating discussions. World-class alpinist Gerlinde Kaltenbrunner shared the story behind her long career to become the first and only woman to climb all 14 of the world’s 8,000 meter peaks without supplemental oxygen and with no support from high altitude porters.
“I wanted to know that I could do it under my own power,” she told me in an interview. “If not I should climb smaller mountains.” 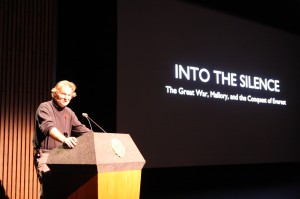 Inspired by a love of climbing many of the adventure stories shared throughout the festival provided much insight into the motivation behind the great expeditions of modern times and the not so distant past. National Geographic Explorer in Residence and author Wade Davis offered up a most intriguing and detailed summary of the events   during and shortly after the first World War that lead to the famed climbs of Mount Everest in 1922 and in 1924 which claimed the life of British adventurer George Mallory. From his book “Into the Silence:The great War, Mallory and the Conquest of Everest” we learn that an ascent of the highest mountain in the world may only have been climbed by those who endured and survived the most horrific moments in all of human history.
“After that experience,” Davis paraphrased from his book when we spoke, “there was nothing more that death could show them, short of their own.” 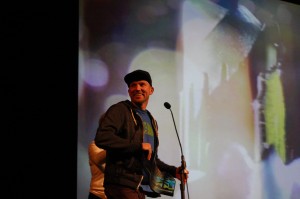 It is in these wonderful books and films that we get to imagine and perhaps scheme to achieve the next great adventure. Sharing the stories of action sports athletes on the cutting edge Sender Films producer Peter Mortimer took home three prizes for Best Short Mountain Film (Reel Rock 7: The Wide Boyz), Best Climbing Film (Reel Rock: 7 Honnold 3.0) and the Radical Reels People’s Choice Award (Reel Rock 7: La Dura Dura).  In “Crossing the Ice”, a feature that took the Best Film trophy for Exploration and Adventure, the over-all People’s Choice award and the Grand Prize, accounts the seemingly ill-conceived but successful trans-Antarctic trek on skis by two friends to the South Pole and back. Australians James Castrission and Justin Jones made the 89-day journey over 2,275 kilometers of open tundra. Best known as Cas and Jonesy these best of buddies make their way through the highs and lows of a grueling experience with infectious humor and enthusiasm. Despite numbing cold temperatures 40 degrees below zero while hauling sleds weighing more than 350 pounds Cas and Jonesy demonstrate that anyone with the desire and passion can achieve goals that might seem impossible.
Soon to venture out on its world tour the Banff Mountain Film Festival will inspire the creativity of millions. Through stories of adventure on skis, mountain bikes, kayaks and camels each presentation from one town to the next will undoubtedly spark the ambition of viewers to explore not only what lies beyond the far horizon but deep within themselves. 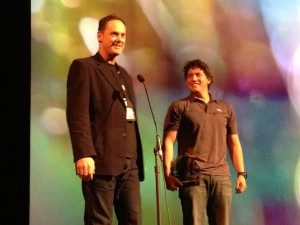 For details on the Banff Mountain Film Festival World Tour visit http://www.banffcentre.ca/mountainfestival/worldtour/
The Joy Trip Project is made possible with the support sponsors Patagonia, Rayovac and the New Belgium Brewing Company