A Fist Full of Birr – The Joy Trip Project

18 Sep A Fist Full of Birr – The Joy Trip Project 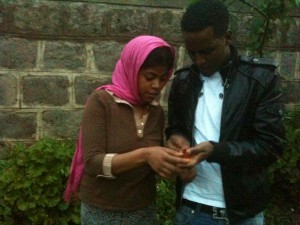 In 2010 I spent my 44th birthday in an Ethiopia brothel. Believe it or not, that’s what can happen as a result of what can only be described as anxiety induced amnesia. I forgot my ATM pin number.
I was on a reporting assignment, doing a story on an NGO that builds schools in the poverty stricken regions of Eastern Africa call Imagine One Day. I’d just arrived in Addis Ababa and as I’m about to withdraw a couple of hundred bucks in trade for the local currency, Ethiopian Birr, I ask myself, “Wow what would happen if I forgot my pin code?”
Thoroughly jinxed that’s exactly what happened. And here’s what happened next.


A Fist Full of Birr
Daniel sits waiting patiently. The Deutsche Bank office in the Addis Ababa Sheraton Hotel has plush velvet seats. He folds into this one with the preternatural self-awareness of a panther in a tree. I was Daniel’s mark and didn’t even know it. As I turn from the teller window holding 3,000 Birr in cash the first thing I say is, “Thanks man. You’re a lifesaver.”

I met Daniel about an hour earlier as I searched the crowed streets of Addis looking for an automatic teller machine. Most merchants in this third world metropolis don’t take plastic and I was heading to a remote part of Ethiopia where cash is king. Daniel must have overheard my conversation with the cab driver as I asked for directions through his passenger side window
“You need ATM man? I show you.”
My first instinct is not to trust this guy. I’m further from home then ever in my life. And with the clarity of 20/20 hindsight today I can say without a doubt I was a complete and total chump.
“That’d be great,” I say. “Lead the way.”