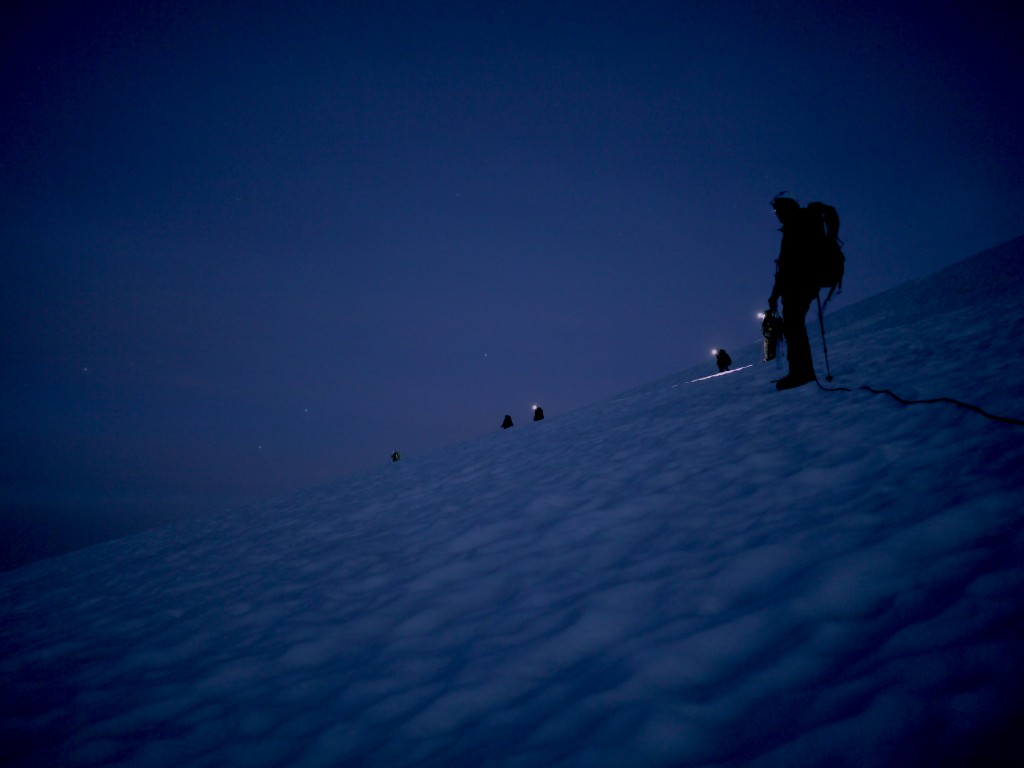 Morning comes early in the mountains. By definition an alpine start rouses climbers from sleep long before sunrise. Gathered on the Easton Glacier the night before, we discussed our departure time at the team meeting. My first thought was probably shared by the others.
“Are you friggin’ kiddin’ me?”
But no one said anything. We just agreed to be roped up and ready to go. One by one we shuffled off to bed.
At 2 am I lay in my tent wide awake huddled against the cold. I shivered, but not for the temperature. In mid summer the pre-dawn chill was well above freezing. I shook in anticipation of what lay ahead.
Summit day on Mount Baker was my wake-up call, a shocking preparation for our climb of Mount Denali 9 months in the future. There in our high camp at 7,000 feet the journey to the loftiest peak in North America instantly became real. And as I struggled out of my sleeping bag to find my boots the voice in my head said in words what my body knew all too well.
“You’re not ready. Man, you’re nowhere near ready.”
Three days earlier we hiked along a dirt trail scattered with pine needles. Straining against our heavy packs we trudged upward along a steady grade toward our first camp. We were 13 in all, two teams. Seven of us were there to learn, students of the National Outdoor Leadership School. Our two instructors were there to guide us on a roped ascent of the most glaciated mountain in the lower 48. The other four, NOLS instructors as well, followed our path with cameras and microphones, a media team sent to document our climb. We aimed to make history.
Our group was on track to put the first majority team of African-Americans on the summit of Denali. But even as I sucked down the relatively rich air a few thousand feet above sea level it became clear to me that I might already be out of my depth. We climbed slowly over the tree line and onto the first of several snowfields. That’s when I started to lag behind.
New boots put a serious hurting on my feet. We kicked steps into the snow making our way up along a path that was a combination of rock and ice. It was slippery and added to the energy required to haul 50 pounds of personal gear, climbing equipment and food. On a break, one of the strongest members of our team came along side me as I sat panting drenched in sweat.
“You want us to take some of your weight?” she asked.
Adina Scott moves over mountain terrain like an elfin princesses right out of Tolkien. I must out-weight her by 40 pounds, but this Seattle doctorate of engineering, 32, has the carrying capacity and pedal dexterity of a Peruvian llama. I reluctantly handed over a snow picket and an avalanche probe from the group gear I carried. Not the heaviest items in my pack, but giving them up was a formal concession of my inability to portage my fair share as part of the team. The symbolism wasn’t wasted on me. I had to do better.
We hiked further up the snowfield and every step was like taking a blow to the shins with a two-by-four. Every ten paces or so I’d stop, lean into my trekking pole and take a dozen deep breaths. The rest of the team was out of sight over next ridge as I plodded along. Dave, a member of the media team, made me stop, take off my pack and choke down some food and water.
“Have you been eating?” he asked. The answer made me feel stupid. I shook my head, no.
We sat there chatting while I ate and drank. I was grateful for the distraction of conversation and the comfort of compassion. I could feel my strength slowly rebound when our course leader Angela Patnode came over the ridge retracing her steps through the snow.
“We’re setting up camp over there,” she said pointing over my shoulder. “I’m going to take your pack.”
It would have been foolish to say no. I transferred the weight from my back to hers and followed as she ascended the ridge. We scrambled over a rocky outcropping clear of the snowfield to find a massive field of open ground at the very edge of the glacier. Patches of heather and wildflowers colored the landscape with splashes of green, yellow and purple, stark against the white background of our objective a maze of crevasses and ice walls at the base of Mount Baker.
Ahead members of our team we’re setting up their tents and making camp. About 100 meters away Angela handed me back my pack. A life coach from Montana she’s likely sensitive to the delicate psychology of failure. With my burden of weight she passed back to me the dignity of walking the final few steps in front of everyone under my own power. As I marched into our camp, the symbolism wasn’t lost on me. It was only the first day. And I had to do better.
To be continued…

The Joy Trip Project is made possible with the support sponsors Patagonia, Rayovac the New Belgium Brewing Company and the Outdoor Retailer Summer Market.