Reel Rock Film Tour: The World’s Best Climbers Take It to the Next Level – The Joy Trip Project

31 Aug Reel Rock Film Tour: The World’s Best Climbers Take It to the Next Level – The Joy Trip Project 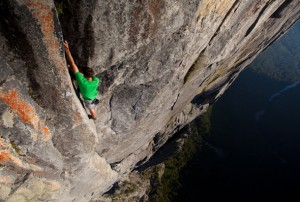 During the 2012 Outdoor Retailer Summer Market the action movie makers at Sender Films treated a VIP audience to a sneak preview of their signature production the Reel Rock Film Tour. With four features, each over 20 minutes, this seventh edition of the program includes appearances by a few of the top names in climbing and a first-time collaboration with the daring creative minds at Camp 4 Collective.
Presented in a surprisingly elegant venue at the Salt Lake City Library, the Reel Rock Film Tour preview offered a rare opportunity for the filmmakers and athletes to share their work with a throng of true believers. Though the tour will premiere at Sender’s home base in Boulder, Colorado, on September 13, this event seemed to celebrate the growing value and popularity of adventure movies. As more industry sponsors like the North Face, GoreTex, and Sterling Rope throw down serious cash, the production quality of new films is on the rise and the genre is coming into its own as a moneymaker with a solid return on the investment.
“Reel Rock is just growing,” said Sender Films’ Peter Mortimer. “Last year we did 300 shows around the world and that’s continuing to expand, not only the number of shows but the audiences.”
Venues last year sold out with record attendance. Screenings of Reel Rock 7 in larger communities may extend the program over two nights to accommodate more people. And a few other modes of distribution are helping to bring the tour to more and more viewers.
“We’re selling Reel Rock as a TV series,” Mortimer said. “That’s why these films are so meaty. We’re trying to look at what would make a general audience half hour TV show that will bring more people to the Reel Rock idea that may never see it on the tour.”
Even though they’re targeting a broader cross-section of the viewing public the Reel Rock films remain true to the spirit and authenticity of classic climbing movies. Shot on location in some of the most exotic corners of the world each feature delivers images and a narrative that will appeal to most avid climbers.
The Dura Dura features leading sport climber Chris Sharma as he links up a series of moves with Czech climber Adam Ondra. Recorded in Catalunia, Spain the two work to put up the world’s first 5.15c.
In the film The Shark’s Fin, Camp 4 Collective’s Jimmy Chin and Renan Ozturk make their way with Conrad Anker to the summit of Mount Meru in the Himalaya. Their three-year journey from a first attempt failure in 2008 to success in 2011 makes for great storytelling. Collaborating with Sender to create a shorter version of The House of Cards, coming out in the fall, Camp 4 shares their tale in Reel Rock-style.
Truly compelling in the Reel Rock series is the latest film to profile free-soloist Alex Honnold. Called Honnold 3.0 this movie tells the story of his incredible rise to success and his efforts to remain at the top of this very dangerous sport as he attempts to climb (mostly free-solo) Yosemite’s El Capitan, Half Dome and Mt. Watkins all in less than 24 hours.
Not shown in the Salt Lake City preview was the film Wide Boys. Featuring British climbers Tom Randall and Pete Whittaker, the movie follows their exploits as they travel the American West to find the most challenging off-width cracks. Leaving the audience something to look forward to when Reel Rock opens in September Mortimer and his team at Sender Films have set the stage for what promises to be the best tour yet!

This story originally appeared in the National Geographic Adventure blog Beyond the Edge
The Joy Trip Project is made possible with the support sponsors Patagonia, Rayovac the New Belgium Brewing Company and the Outdoor Retailer Summer Market.