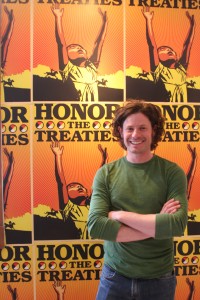 National Geographic photographer Aaron Huey is no longer a witness. For seven years he’s photographed the people of the Sioux Nation on their lands among the Black Hills of South Dakota. And though he was originally drawn to the Pine Ridge Reservation by a compelling story of poverty and desperation, he now plies his talents toward sharing the travesty of injustice that continues to rob these once proud Native Americans of their legal rights and sacred land. Accepted into the community as an advocate Huey has crossed the line from journalist to activist.
“The people who took me in they just happen to be in a dark world,” he says in the new film Honor the Treaties. “And so I use that as an opportunity to talk about genocide and to talk about what it’s like to grow up in a prisoner of war camp where one day the guards went away.”
In the August edition of the magazine Huey reveals images and stories of a forgotten people. Confined to reservations following the plains wars of the late 1800s Native Americans began a horrific cycle of slow death that could mean the end of their civilization. Relegated to a world of gang violence, substance abuse, disease and malnutrition a narrative unfolds to demonstrate that the Sioux perpetually suffer the ill-effects their systematic destruction at the hands of the U.S. government over more than a century.
“The last chapter in any successful genocide is the one in which the oppressor can remove their hands and say, ‘My God, what are these people doing to themselves? They’re killing each other. They’re killing themselves,’ while we watch them die.” Huey says. “This is how we came to own these United States. This is the legacy of manifest destiny.”
As an artist Huey aims to raise awareness for the plight of native people. Through a series of photographs, posters and murals he and others are working to bring into focus an ongoing tragedy that has faded from public view.
“The amazing thing about art is that it can hit people in the gut and effect them emotionally and remind them they have to intellectually rigorous about the things that make them feel,” said famed poster artist Shepard Fairey. “We’re so numb to so many things because there’s so much white noise. But art can remind people that they need to care.”
The film “Honor the Treaties” helps to illustrate a portion of Huey’s work. Find more information on his web site http://aaronhuey.com/or check out the August issue of National Geographic http://ngm.nationalgeographic.com/2012/08/pine-ridge/fuller-text

Honor the Treaties | The Film from eric becker on Vimeo.
The Joy Trip Project is made possible with the support sponsors Patagonia, Rayovac and the New Belgium Brewing Company