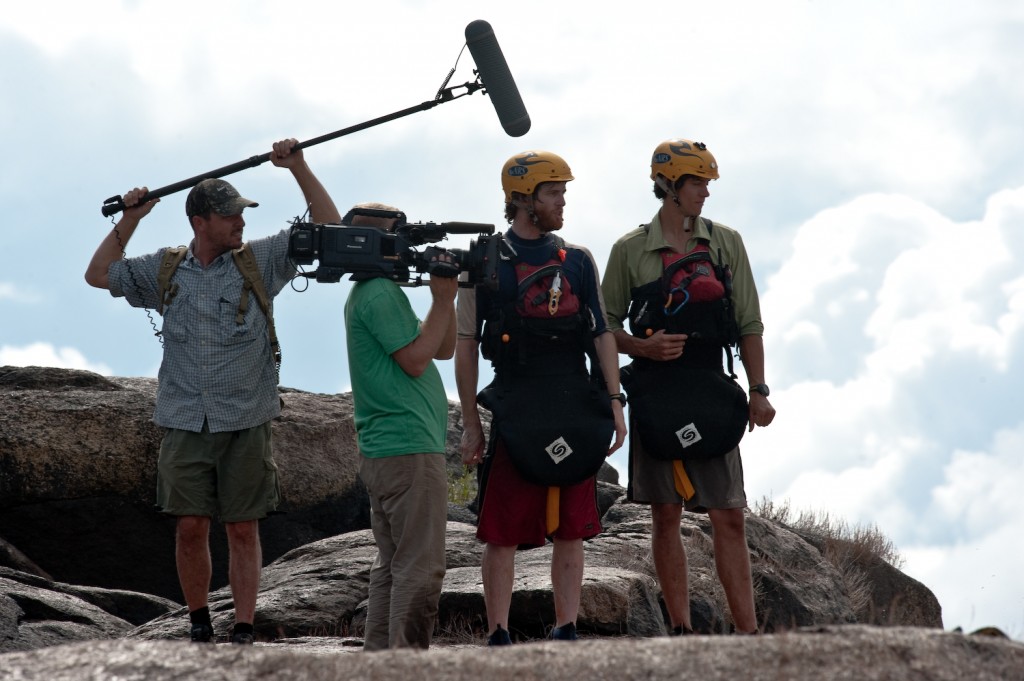 The movie business takes center stage with three late afternoon screenings of adventure films at the 2012 Outdoor Retailer Summer Market. At OR Rocks! show attendees can take a break from the manic pace of the Salt Palace for a little entertainment while action movie producers connect and network with fans as well as potential sponsors in the Utah Museum of Contemporary Art. In this classy venue right next door to the convention center OR has created a wonderful showcase to present the latest in outdoor sports inspired cinema.

Opening on Day 1 of the show OR Rocks! welcomes the Reel Paddling Film Festival Presented by Rapid Media, publisher of Adventure Kayak Magazine and the Paddling Buyers Guide. Featuring movies themed around canoes, kayaks and SUP boards this series offers up stories for those who love time on the water.
“I appreciate this opportunity,” said Rapid Media’s Scott MacGregor. “Seven years ago I dreamed of the RPFF playing at OR. It’s a great fit for the show and the perfect venue.”
On Days 2 and 3 the film series continues with a collection of short films and two features curated by James Mills of the Joy Trip Project. Gathered from recent premieres at the 5Point and Mountainfilm Festivals these movies are among the very best of the 2012 season and a few have already received coveted awards.
“I’m very excited and honored to have been given the chance to bring these incredible films to Outdoor Retailer,” Mills said. “Movie making is quickly becoming a big part of promoting the outdoor business and what better way is there to bring producers and their supporters together to talk seriously about future projects.”
At its core OR Rocks! aims to boost the level conversation on the topic of adventure filmmaking. Not only can producers get together and share feedback on their work, but they can also build relationships with a growing number of company sponsors who might have an interest in funding their next movie.
“This is really a great way to connect with key industry influencers,” said Beda Calhoun co-founder of the adventure film production company Brick & Mortar. “We go to all these film festivals but they’re not always there. Here we can get together with a more diverse group of decision makers and really legitimize adventure film as a business.”
With any luck OR Rocks! will be a biannual event presented at both the summer and winter markets. With the growing popularity of adventure film screening events across the country this new venue at Outdoor Retailer has the potential to help improve the production value and quality of movies to appeal to a much broader audience. Presented with same the excitement and enthusiasm of a new retail product at OR the genre can only expand even further.
Check out the complete listing of films below:
;
REEL Paddling Film Festival
Thursday August 2, 2012 7:30 – 9:00 p.m. at UMOCA
Chasing Water

Pete McBride grew up on a ranch in Western Colorado, a child of the Colorado River. After a life spent visiting other countries to tell stories as a National Geographic photojournalist, in 2008 Pete decided to follow the water from his family’s ranch to see where it ends up. This is the story of Pete’s journey and a story about the lifeblood of the American West.
Director and Producer: Pete McBride http://www.petemcbride.com/
;
The Barron Canyon

A stop-motion film depicting the trials and tribulations of camping during Halloween. Filmed entirely with a Nikon D60 DSLR.
Director and Producer: Malcolm Taliano
;
;
Bugs 4 Life

Follow Matt and Dave as they pursue their riverbugging dream all over central northeastern Ontario.
Director and Producer: David Hartman
;
Standup 4 Great Bear

Jake Norton and Wende Valentine hope to teach their children to find what they love in life, and for Jake, that means leaving home several times a year to quench an insatiable desire to climb the world’s tallest mountains. Wild Love is a behind-the-scenes glimpse into their lives during one expedition, and explores the joys and challenges of balancing a passion for adventure with a family life. Andy Maser producer: http://wildloveproject.com/
Unicorn Sashimi

Filmmaker Ben Knight traveled to Japan to make a ski movie. What he discovered was a rich tapestry of art, culture and deep powder to create a breathtaking movie that serves up a little known slice of the snow-faring world.
Ben Knight Producer: http://www.feltsoulmedia.com/thewire/2012/07/09/unicorn-sashimi/
The Way Home

Although our national parks belong to all Americans, it’s a sad fact that very few people of color ever set foot in some of our country’s most beautiful places. This film takes journey to Yosemite National Park with the Amazing Grace 50+ Club, a Los Angeles-based senior church group whose members are looking to reverse that trend.Amy Marquis Producer: http://www.npca.org/news/magazine/all-issues/2012/the-way-home.html
Shannon Galpin, a Moveshake Story

As the founder of the non-profit Mountain 2 Mountain Shannon Galpin selflessly dedicates much of her time and energy in service to women and girls throughout the war torn regions of Afghanistan. In this film she demonstrates a rare passion for taking action in spite of overwhelm odds.
Allie Bombach Producer: http://www.moveshake.org/2012/06/04/shannonbio/
The Equation

Science can be as much art as adventure. When an explorer goes out looking for beauty on an epic journey he discovers a formula that defines one of life’s greatest mysteries.
Jeremy Collins Producer: http://jercollins.com/
;
;
Day Three: Saturday August 4, 2012 4 to 5 PM at UMOCA
Of Souls & Water: The Shape Shifter

Things get a little out of hand when an office manager enforces his company’s new go-green initiative with the help of an over-eager, highly skilled assassin.
Jonathan Browning Producer: http://screamingfrog.com/
;
Shattered

When you’ve given everything, what do you have left? After achieving his dream summit, elite climber Steve House finds himself empty. Broken and untethered, he searches for a fulfillment more lasting than a faraway peak.
Tyler Stableford Producer: http://tylerstableford.com/blog/
The Last of the Great Unknown

Deep within the Grand Canyon’s vast wilderness are secret and intimate tributaries rarely visited by man. In this film a team of canyoneers systematically explores the hidden drainages, slots and cracks to reveal a labyrinth of secrets deep within their walls.
Dan Ransom Director: http://www.lastofthegreatunknown.com/
Moonwalk

Dean Potter is nothing if not creative. In this short piece, he highlines across a desert landscape with a massive full moon as his backdrop.
Mikey Schaefer director: http://mikeylikesrocks.com/blog/
;
;
The Joy Trip Project is made possible with the support sponsors Patagonia, Rayovac and the New Belgium Brewing Company