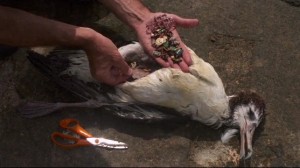 Artist and filmmaker Chris Jordan fully intends to break your heart. His latest project currently in production takes a hard look at the role of plastics in the tragic deaths of albatross on the Midway Atoll in the South Pacific. These majestic sea birds die by the tens of thousands each year as they ingest plastic debris floating in the Great Pacific Garbage Patch, a gyre of marine litter believed to cover an area twice the size of the Hawaiian Islands. In his movie “Midway” Jordan aims, as one attendee at the Telluride Mountainfilm Festival described, “to make you fall in love with these animals and then kill them right before your eyes.”

Looking for collaborators on Kickstarter Jordan shares a few of the images he’s already collected in the hopes of pulling in enough financial support to finish his film. In a clear distinction between art and journalism “Midway” is meant to not only tell the story of the albatross but to encourage viewers to take action and save them.

“An artist goes there and is willing to have their heart broken,” Jordan said at Mountainfilm. ” When a person is in love with their subject you can feel it in the images. It’s intangible but somehow that love gets transferred across the wires and through the digits directly to the heart of the person who is watching.”

Jordan hopes that those who see his Kickstarter campaign will contribute enough funds to cover additional production expenses that include travel back to Midway, the composition of a musical score and the hiring of a skilled editor. He’s also looking to secure aerial photographs shot from a remote control helicopter. But at the heart of his efforts is to bring awareness to the plight of albatross that are falling victim to our careless disposal of non-reusable plastic consumer goods. Though these birds are at risk it’s not hard to see that by taking action to protect them we may indeed save our own lives.

“Do we have the courage to face the realities of our time,” Jordan asks,” and allow ourselves to feel deeply enough that it transforms us and our future?”
Check out Jordan’s Kickstarter campaign video and contribute if you can. The Joy Trip Project is proud to back this film.