18 May Tavis Talks about Expedition Denali – The Joy Trip Project 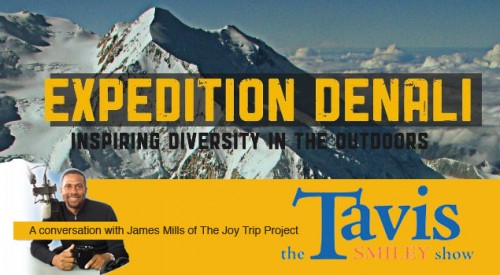 Just a few minutes ago I came in off the trail from the rim of the Grand Canyon. Settling into a wireless hot spot and a cold Corona at the Yavapai Lodge I fired up the laptop to find a message on Facebook from my old friend Menno van Wyk. He was my boss at Montrail since before it was called One Sport. So we go way back. It was of course great to hear from him, but his post to my time line filled me with dread.
“James – Good to hear your voice on Tavis Smiley today,” he wrote. “When are you coming to/through Seattle? Congrats & good luck with your expedition.”
Preparations for Expedition Denali are going just fine thank you. I’m still out of shape, but building strength and endurance every day. The prospects of climbing the highest peak in North America, should I make the summit team cut, are the least of my worries. What scared me was hearing my voice unedited on National Public Radio.
Here’s a confession: I’m not as smooth as I sound on the Joy Trip Project podcast. Truthfully I put myself through some pretty serious editing to sound as a good as I do in each episode. Setting in my own studio on the sharp end of the microphone was a tough experience and I’ll admit I was really nervous. I’ve been a contributor to the Tavis Smiley Show as a journalist on two separate occasions. And though we’re not tight like he is with Cornell West, I can have a conversation with the man. It’s not like the questions were particularly hard. I’ve answered them dozens of times. I suppose what made it difficult was being the team spokesperson in our first national broadcast.
Despite the fact that I’ve reported on Expedition Denali for months now this is not my project. I am thrilled and honored to part of a wonderful team of dedicated talented people who share the common goal of introducing under represented members of our society to the outdoors. It’s a very ambitious undertaking  and I am humbled by the awesome responsibility to even tell the story. And while I intend to do a much better job of it in the future, hopefully for NPR, for now please forgive my stumbling and stammering through this interview.

Please share your thoughts and comments. For more information on Expedition Denali visit : http://expeditiondenali.nols.edu/
The Joy Trip Project is made possible with the support sponsors Patagonia, Rayovac and the New Belgium Brewing Company