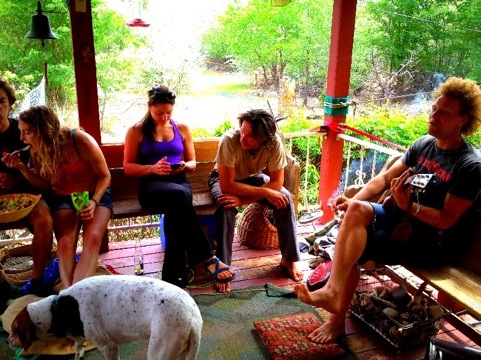 I woke up this morning nowhere I expected to be. After a 3-hour joy trip from Carbondale, Colorado I found myself in Moab, Utah. I’d originally planned to camp by the river on the edge of town. Instead I wound up having to pick between sleeping on a cozy couch or way up high in a tree slung with nets. Those are your choices when you crash at the Monkey Den.

The 5Point Film Festival wrapped up the day before and I left Carbondale with a surge of enthusiasm for a life in adventure. Four days of action movies and inspiring stories set me on course toward something wonderful. I suppose what made the event incredibly special was being able to connect with so many talented people with similar goals and aspiration who are out in the world achieving amazing things.

Fresh off his co-production of the series “Wild Love” filmmaker Andy Maser is heading back to Portland to begin a documentary project for National Geographic Television. And Nick Waggoner producer of ski films like Signatures and Solitaire is heading to New York State to start production on a job for the History Channel.

These young people share their adventures in the creation of film and other media to demonstrate how just about anything is possible. And at the 5Point Film Festival we get a collective glimpse into the lives of those who push the boundaries to deliver truly compelling stories. So as I made my way through Moab I just had to hook up with my friend Andy Lewis.

Made famous by his appearance in the 2012 Super Bowl half-time show with Madona, Andy is a professional slackliner. The star of 5Point featured movie Sketchy Andy from Sender Films asked me over to join his crew known as the Monkeys for some Mexican food. BASE jumper and former U.S. Navy F-14 pilot Richard Webb had just flown in a big batch of fresh tamales from New Mexico. Excellent timing! Rising to the occasion I pulled into the City Market and put together the makings for my signature mango salsa. On a cul-de-sac at the end of a residential neighborhood the Monkey Den wasn’t hard to find.

With a bag of groceries and four-pack of Fat Tire tallboys I sidled up the sidewalk to sounds of music and laughter. I knocked on the door and was psyched to see a few old friends. I’d met Gibbon Slacklines pro athletes Emily Sukiennik and Michael Payton a few years back in West Virginia and had no idea they’d relocated to Moab to challenge their skills in the sport of highlining.

The Monkeys put me right to work after a few quick introductions to everyone there. Within minutes I was chopping away making dice of tomatoes, onions, bell peppers and ripe juicy mangos. Add a little cilantro, crushed red pepper, jalapenos and lime juice and we were good to go. We piled their plates with spicy beans, tortilla chips, guacamole and delicious tamales fresh from Albuquerque.
p
Out on the deck over cold beers I got acquainted with my new monkey friends. I met Brent Cain an area groundskeeper and single dad who owns the house and offers a stabilizing adult influence. Another permanent resident is the photographer Scott Rogers whose images capture the desert beauty of Moab along with the high altitude antics of his fellow monkeys. And Andy’s girlfriend Hayley Ashburn is an aspiring creative writer who quite literally wrote the book on “Modern Slacklining”.

Strong, agile and brave everyone at the Monkey Den had moved to Moab to climb high cliffs and rig long lengths of webbing between towering spires. A few were training to make the leap from on high to soar above the desert in a wingsuit or paraglider. Like slacklining the sport of highlining involves walking the line of webbing from one point to the other. But With safety harnesses for protection highliners in Moab press their nerves to find balance on that swaying nylon ribbon between 50 and 400 feet in the air.

If highlining sounds dangerous, it is. The margin for error is tiny relative to the devastating consequences should one fall. But with the collective wisdom of experience the Monkey crew keeps one another safe and motivated to send the next mission wherever it may be. I suppose it’s that sense of community and support that makes the defiance of certain death even remotely appealing. The thrill of height and exposure enjoys the added allure of good friends who share the slack life. 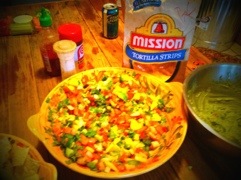