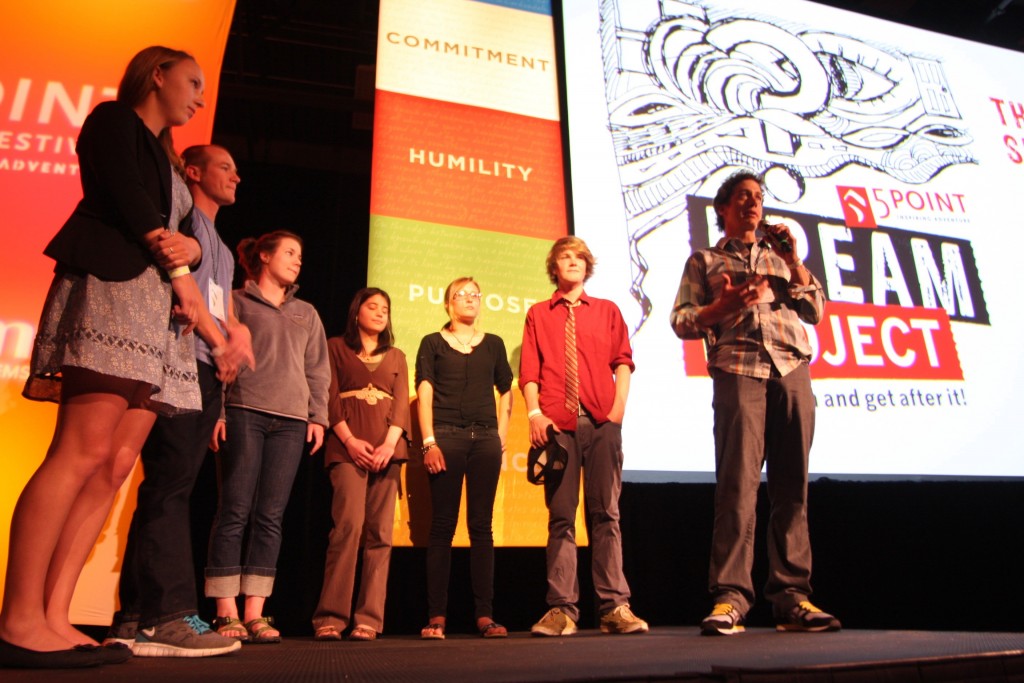 A film festival of excellent quality is far more than the sum of its movies. The cultural experience that draws audiences to witness a spectacle of fun and adventure is a unique opportunity to exceed the mere goal of entertainment. The fifth annual  5Point Film Festival has built a community where aspiring explorers can watch reality unfold in film through stories that first began with a dream.

Opening night of the four-day event possessed the intimate flavor of a family reunion. This gathering of our tribe brought together in Carbondale, Colorado distant relations who share in common the genetic imperative to explore, to discover, to dream. And in the fellowship of kindred spirits a passionate crowd packed the local recreation center to perform the ancient exchange of myth and legend, parable and fable. Through motion pictures as a community they shared stories of adventure that define the most intricate details of our modern times to celebrate the journey from where we came and forge the path toward where we aim go.
Far from fantasy each of the films in the program painted images of a grand ideal. The precision craftsmanship of Japanese board shapers set the theme from the first few frames of Unicorn Sashimi by Ben Knight and Travis Rummel at Felt Soul Media. Slow motion snowfall in the mountains of Hokkadio followed the trail of backcountry skiers as they plowed through deep powder scored to the soundtrack of traditional Japanese drums. Snow and skateboarder Amy Purdy defies the odds to triumph despite two prosthetic legs in the series by Eliot Rausch Pass The Bucket. Top athletes ponder the question in film of the same title Why by Corey Rich. Ultra mountainbiker Rebecca Rusch, extreme kayaker Dane Jackson and free solo climber Alex Honnold lead us through awe-inspiring landscapes to give us their perspective. And if you’ve never seen the softer side of adventure porn star Timmy O’Neill filmmakers Andy Maser, Emily Nuchols and Jenny Nichols reveal his most passionate motivations in the balance between extreme sport reality and romantic relationships in the world premiere of their new series Wild Love.
At the very heart of 5Point is a commitment to inspiring the next generation to dream of adventure. For the second year festival creator Julie Kennedy announced the recipients of travel grants to 5 area high school students in the Dream Project. Through the coming months Lucien Blakemore, Anabolena Loor Mendoza, Claire Woolcott, Maggie Deveny, and Casey Hynes will visit remote locations around the globe to both explore foreign cultures and work directly to bring support to communities in need.
In a live slide show presentation local Carbondale hero Hayden Kennedy recounted the arch of his career in mountaineering. The son of Julie and Michael Kennedy, publisher of Alpinist Magazine, the young man recently made history with an epic ascent of Cerro Torre with Canadian climber Jason Kruk. There the team pulled down scores of bolts on the long standing “Compressor” route to return the great Patagonian peak back to its natural state and plunge themselves into an international controversy.
After intermission the excitement continued with an amazing film by Stu Thomson. Danny Macaskill: Industrial Revolutions demonstrates the full range of bicycle trick-riding through the rusted bone yard of an abandoned railway ironworks facility in the countryside of Scotland. In the world premiere of this new film Shattered Tyler Stableford explores the apprehension of world class mountaineer Steve House who questions what remains after reaching the summit. Tandem companion cyclist Dominic Gill rides through the Arab Spring and a scorching hot desert to offer a personal look into the rise of democracy as witnessed by perfect strangers who share the adventure in the latest installment of Take A Seat Egypt. And finally a former pro-climber finds redemption and reward by coaching a nine-old prodigy to become a champion in Obe & Ashima by Josh Lowell and Sender Films.
Spanning three hours into the night the 5Point Film Festival is a journey into the world of the extraordinary, but not the impossible. Perhaps the most compelling feature of each film is the clear understanding that these stories are indeed real and illustrate the vision of people who pulled from their passion an intangible idea, a dream to express for themselves a truly unique experience. And as they watch the audience at 5Point is compelled to believe that perhaps their dreams might also come true.