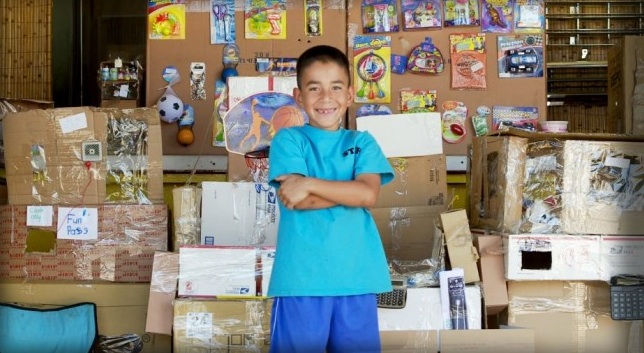 A new short film by Nirvan Mullick could make you rethink what it means to play outside. Caine’s Arcade is a heartwarming true story about a 9-year-old boy who turns his dreams into reality with a couple of cardboard boxes and a roll of packing tape. In a world where children often restrict their play to commercially derived electronic games it’s encouraging to see the creation of games born of imagination and the selfless desire to share fun.
Caine Monroy is a little boy in East Los Angeles who loves to play arcade games. Favoring those that require physical activity and tactile skills over video games he builds an elaborate array of cardboard attractions in an open street-side bay of his father’s auto supply store. Open for business Caine encourages passersby to spend a bucks and play. Perhaps it was that combination of entrepreneurial spirit and naive enthusiasm that drew filmmaker Mullick in to try his luck.
“I asked him how much it is to play and he said for one dollar you get four turns,” Mullick says in the film. “But for two dollars you can get a fun pass. Well I asked how many turns do you get for a fun pass? He said 500 turns. I got the fun pass.”
Mullick was so impressed by Caine’s ingenuity that he organized a flash mob to come play the little boy’s games. A big crowd organized over the Internet showed up to join in the fun and truly made his day.
“Is this real life or was I just dreaming?,” Caine said. “But they were real people and they were really playing the games.”
What makes this film so powerful is its utter simplicity. To see this boy so pure of intent in not only his desire to play but to inspire others to come out to play with him is compelling beyond words. We put so much stock in getting kids to play outdoors but we often forget how important it is for children to play outside of themselves. Here Caine brings his imagination into the world to create a reality that he can actually experience. Mullick’s brilliant portrayal of this story is nothing short of magical because it demonstrates that sheer joy is still possible through the power of play.