The Mountain, an essay by Shelton Johnson

12 Mar The Mountain, an essay by Shelton Johnson 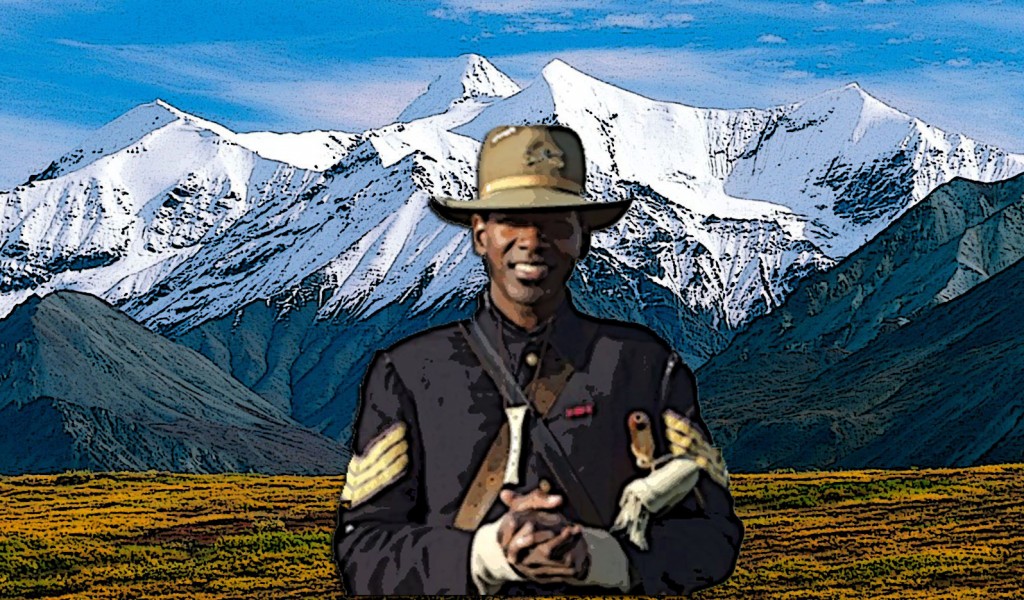 “Artists have gone with us into the Arctic and I have heard them rave over the wonderful beauties of the scene, and I have seen them at work trying to reproduce some of it, with good results but with nothing like the effect of the original…”it is color run riot”’

—-from A Black Explorer at the North Pole, pg. 67, by Matthew A. Henson

African Americans have been explorers and adventurers from the very beginnings of our republic.  People of African descent accompanied many of the earliest Spanish explorers including Cortez and Balboa.  We have Estevan and his search for the seven cities of gold.  We have the likes of fur trappers such as James P. Beckwourth, and wilderness guides such as Harriet Tubman who led hundreds north to freedom on the Underground Railroad.  At the beginning of America there were the invaluable contributions made to the Corps of Discovery by York, Clark’s manservant, who accompanied and contributed greatly to the success of Lewis and Clark.

In this day and age where the landing of Apollo 11’s lunar module into the Sea of Tranquility on July 20, 1969 is now considered history, we should take note that there are still many places in this world where no human being has ever trod.  This becomes especially noteworthy when we consider the ethnicity of explorers of yesterday and today.
When Robert Peary claimed to be the first person to reach the North Pole on April 6,1909, he was not alone.  There were four Inuit men and one African American man, the only other American who stood beside Peary—Matthew Henson, an African American.

“…and it was done; on the peak of a huge paleocrystic floeberg the glorious banner was unfurled to the breeze, and as it snapped and crackled with the wind, I felt a savage joy and exultation…and I felt all that it was possible for me to feel, that it was I, a lowly member of my race, who had been chosen by fate to represent it, at this, almost the last of the world’s great work.”  –ibid., pg. 136, Henson.

Unfortunately, because of the virulent racism of his day, Matthew Henson, who accompanied Peary on eight expeditions to the Arctic, was mostly ignored at the conclusion of that journey in 1909, not just by the general public but also by Peary himself.

History has since reversed its opinion of Henson and he is now credited as being one of the giants of polar exploration.  Since Henson’s day there have been other African American explorers, mountaineers who have followed in the footsteps of their ancestors, and that tradition continues this year with the formation of the first expedition with African American participants who will attempt to summit Denali, the highest mountain in North America in June, 2013, the 100th anniversary of the first ascent of the peak.

This expedition will be under the auspices of the National Outdoor Leadership School (NOLS), and its purpose is to inspire young people of color, especially African Americans, to venture out into America’s wild places and reconnect with a history and tradition that is rooted in the founding of this country.

I’m a member of this team because I believe in its purpose and goals.  For over 25 years I have worked at encouraging all people of color, but African Americans in particular, to explore those great landscapes that were set aside from development and became our national parks.  Denali is the centerpiece of a great national park that was named in its honor, but very few visitors to Denali are African American, indeed, African Americans are the one group least likely to vacation in some of the most beautiful places in the United States.

These young people who will climb Denali, are not newcomers in this enterprise.  They follow in the footsteps of their ancestors, individuals who set goals that observers may have considered impossible to achieve, but they proved them wrong through their actions and their accomplishment.

This marks the restoration of an old tradition, the most human of traditions, that of striking outward in the hope of finding something deep within the human heart, the knowledge that by challenging the world we challenge ourselves, that by going out we also go in, and that the ultimate discovery is the place we find within ourselves.

It is also a return to something deep inside all of us that is profoundly African.  The desire to explore, to seek new horizons, to experience the mysterious is very much an African desire, a desire that all human beings have encoded in their DNA since the days when we wandered through Olduvai and were just family.

This is an expedition, a journey, walkabout, trip, a crossing, a peregrination, a passage to a place on earth that will be entirely new, a new world both for those who take the journey and even for those who follow it through the media.

Martin Luther King, Jr. once famously said, “I just want to do God’s will. And He’s allowed me to go up to the mountain. And I’ve looked over. And I’ve seen the Promised Land…”

Dr. King’s spirit will accompany this expedition and all the ancestors who walked this way before, the dead and the living, from York to Dr. Mae Jemison, the first African American woman in space, because the power of history, moves in all of us and it cannot be denied. It is a sound as profound as the beating of our hearts.

We were meant to do this.  We must do this.  George Mallory, the renowned mountaineer, was once asked why he chose to climb Everest, the highest mountain in the world. He famously answered, “Because it’s there!”

When this NOLS expedition achieves its goal and summits Denali in 2013, we will all be part of that triumph because there’s a generosity in the human spirit that recognizes that every individual achievement in exploration is also a collective victory.  Neil Armstrong said it best on July 20, 1969,

“That’s one small step for (a) man, one giant leap for mankind.”

And it is here that I would beg to differ with none other than Matthew A. Henson who stated near the conclusion of his great Arctic adventure,

“The long quest for the North Pole is over and the awful space that separated man from the Ultima Thule has been bridged.  There is no more beyond; from Cape Columbia to cape Chelyuskin, the route northward to the Pole, and southward again to the plains of Asia, is an open book and the geographical mind is at rest.”
–ibid,  pg. 142,

The geographical mind is never at rest.  It is always seeking new challenges, and new obstacles to overcome.  And it will be rewarded in the future in that eternal quest to discover.  The poet Maya Angelou said it best at the beginning of her poem “I Know Why the Caged Bird Sings”.

What moves in the soul of every explorer in every age but a free bird leaping on the back of the wind?  And how we are all moved at the sight of such at thing! Like climbers past and present, we all dare to claim the sky, to stand on the mountain. One of the most ancient of all human sentiments is a true perennial.  It blooms anew for each generation and in that process inspires a new generation to discover for themselves the wonders of this world.