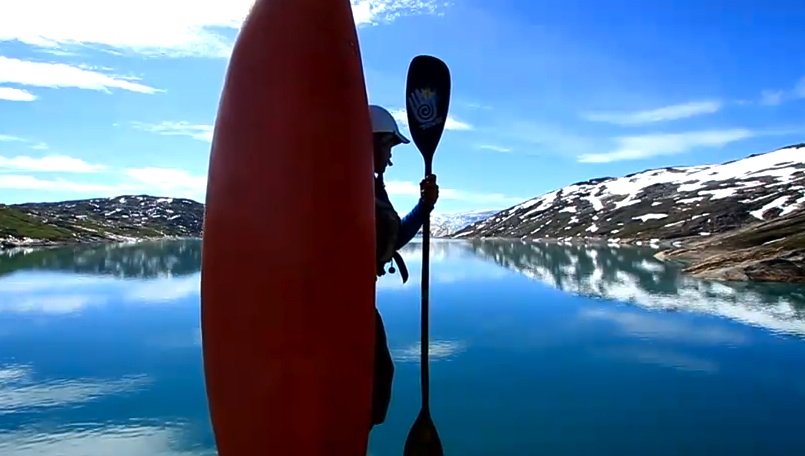 This year’s super charged lineup of films in the 2012 Radical Reels Tour does not disappoint. These specially selected movies from the Banff Mountain Film Festival deliver adrenaline inspired action and sweeping high alpine backdrops that are nothing short of epic. Through 11 films spanning almost two hours riders on skis, kayaks, mountain bikes and skateboards press the performance envelope to the absolute limit and drive viewers to edge of their seats. But in a world where adventure athletes have pretty much conquered every environment known to man it’s getting more difficult to provide audiences with a truly unique experience. And even though we get the thrill ride we expect, the modern adventure film can still reveal much that we never believed possible.

Maybe I’m just getting old, but after you’ve seen a few thousand high-speed vertical descents you’ve just about seen them all. Ironically like those classic action sports Mountain Dew commercials you’re left feeling like I’ve “been there, done that.”
Don’t get me wrong. I don’t want to come off like a cynical douche bag. I personally don’t have the skills to even attempt much of what I see in your typical Rad Reel flick. And though I might be inspired or even tempted to try this at home you get to a certain point where the speed and danger become gratuitous. So you’re left wondering is there anything else? What more can they reveal?
It’s when you look past the action and start taking in the true merits of each film that you most often discover exquisite cinematography, detailed scene composition and sheer athleticism. These are top Banff picks after all. And what the movies lack in storytelling and character development they more than make up for with solid production value and awe-inspiring visuals.
Fresh off a best of Banff feature-length mountain film award Sherpa Cinema’s All. I. Can brings those ultra-steep down hill lines you can only get in Alaska. The 8-minute segment called ‘Perseverance’ follows top riders like Kye Peterson, JP Auclair and Callum Pettit down the plunging chutes of untracked powder accessible only by helicopter. Long shots from the air capture the full magnitude of each ride giving the full scope of directors Dave Mossop and Eric Crosland’s vision.
Mountain bike movies in the tour do for dirt what the ski films do for show.  Here We Go Again directed by Don Hampton & Gardy Raymond puts outdoor riding just on the edge of urban to blend street savvy stunt peddling with steep leaps off the ramp.
From the Inside Out by 2nd Base Films is a joint effort of Anthill Film & the Coastal Crew. In this movie pro rider Brandon Semenuk puts together his ideal freestyle course right in his backyard to realize a complete mountain bike lifestyle.
“Now that I have this yard I can ride anything I want,” he says in the film. “It’s like a total dream.”
That transition from the imaginary to the genuine is at the heart of the Radical Reels Tour. Athletes and filmmakers take their ideas and make them reality. In the whitewater film Frontier directed by Rush Sturges of River Root Productions kayaker Rafa Ortiz explores the waterways of his native Mexico. Set in lush jungles of Veracruz the film illustrates the pro paddler’s discovery of his purpose in his life and career outdoors.
“It’s been a dream come true…We all as human beings have that one thing that keeps us motivated, that keeps us fighting every day, to wake up every day and have something to look forward to,” Ortiz says. “And some times you fulfill your dream and that’s exactly when you start to look for your next dream.”
The Radical Reels Tour is a testament to the human spirit, that force of nature that moves us forward into one new adventure after another. Inspired first by our inherent desire to explore the unknown limits of our abilities we venture out in the wild world to bring back these exciting stories and images. But beyond the action these films demonstrate not only the amazing feats that others have achieved but perhaps they reveal what we might accomplish ourselves.
For a complete schedule of the Radical Reels Tour visit: http://www.banffcentre.ca/mountainfestival/worldtour/radicalreels/