'To The Arctic' Photographs by Florian Schulz – The Joy Trip Project

“Florian Schulz’s breathtaking and intimate photography of the Arctic shows us why this great and seemingly infinite land running away to the north remains one of our last true wild places.” –Wade Davis, NGS Explorer-in-Residence 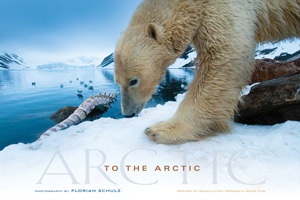 In this extra large-format (15” x 10”) panoramic photo essay—the official companion book to the new IMAX® film To The Arctic 3D from Warner Bros. Pictures, MacGillivray Freeman Films and IMAX Corporation—award-winning nature photographer Florian Schulz takes readers on a personal journey to the remote-yet-vibrant Arctic.
In contrast to the common perception of the Arctic as a ‘vast nothingness,’ Schulz’s images display an ecosystem of surprising richness that is teeming with life. Following the cycle of one year, To The Arctic showcases a pageant of wildlife—oddly captivating shapes of muskoxen, waves of migrating caribou, and some of the most extraordinary images ever captured of a mother polar bear and her two cubs.
From expansive aerials of the rich reds and golds of the summer tundra and stark landscapes of ice, underwater glimpses of beluga whale pods and baby seals, to up-close and intimately personal portraits of a mother polar bear and her young cubs—Schulz’s range of imagery, accompanied by his personal fieldwork stories, explores the remarkable diversity and drama of life in the Arctic. Complementing Schulz’s work is a foreword by Dr. Sylvia Earle, explorer-in-residence at the National Geographic Society and leader of the Sustainable Seas Expeditions, as well as essays from Tom Campion of the Alaska Wilderness League and Academy Award®-nominated filmmaker, Greg MacGillivray, of MacGillivray Freeman Films.
The book also includes several first-person accounts that describe Schulz’s larger-than-life adventures in the far north, where he endured subfreezing temperatures, camped on ice sheets, dove beneath icebergs, and rode hundreds of kilometers by dogsled in his efforts to capture life in the Arctic.
www.mountaineersbooks.org
[cincopa AQIAN0aQ34QS]
The Joy Trip Project Adventure Media Review is made possible with the support of sponsors Patagonia and the Outdoor Retailer Winter Market