‘The Way Home: Returning to our National Parks’

08 Feb ‘The Way Home: Returning to our National Parks’ 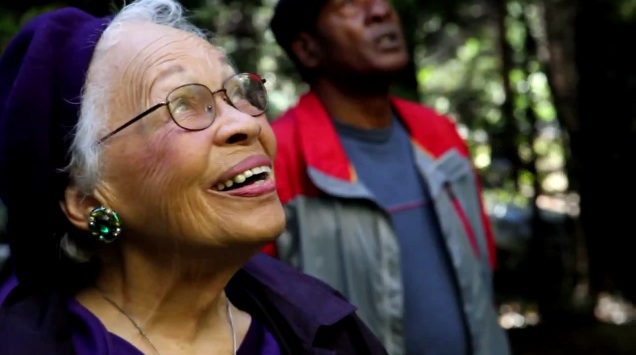 The beauty and grandeur for our national parks may best be witnessed through the eyes of those visiting for the first time. And in a new film by Amy Marquis a vision of Yosemite is revealed to the hearts and minds of people absent not just in their own lifetimes but for many generations. ‘The Way Home: Returning to the National Parks’ follows a brief but compelling journey of African-American seniors who came to claim their rightful place among the millions of citizens who cherish these sacred lands first preserved and protected by their ancestors in the last century.

Produced while on a six-week sabbatical from her job as associate editor of National Parks Magazine, Marquis’ 9-minute movie poignantly explores the issue of racial diversity as it pertains to park visitation in general and Yosemite specifically. Making up a mere 1 percent of park visitors annually, African-Americans are woefully under represented. With the support of the National Park Conservation Association Marquis hopes her film will help to show not only what people of color are missing but to also demonstrate their long standing heritage as park stewards.

“It’s a priority of NPCA to begin engaging audiences and groups of people who are not currently engaged in our national parks,” she said in an interview. “We’re very focused on the National Park Service Centennial in 2016. And part of our vision for the future of the Parks Service is to make sure that all Americans are enjoying these places that they own.”

Few visitors black or white are aware of the contributions made by African-Americans to the creation of Yosemite, Sequoia and Yellowstone National Parks during their inception in the early 1900’s. Ranger Shelton Johnson who appears in the film shares the story of the Buffalo Soldiers, black members the U.S. Calvary who patrolled the parks at the turn of the 20th century to perform many of the same duties that park service employees do today. But despite this historical legacy many African-Americans are simply unfamiliar with the privileges entitled to them as citizens and need as Johnson says to be extended an invitation of welcome.

“You shouldn’t have to convince people to go to paradise,” he said as the film opens. “But if I could go to paradise without dying and see all that is there sign me up! And Yosemite for many people is such a place.”

‘The Way Home’ is a subtle expression of greeting, a warm smile to entice viewers to enter. Free of controversial discussions that seek to find cause or assign blame the film seeks to move forward the idea of diversity in our national parks. And though the question of race is often fraught with animosity Marquis said she believes there is room to find common ground.

“I’m hoping that the film appeals to a part of us that’s human,” she said. “Yes, color is a big part of this story. But when it comes down to it these are real people, having real experiences on lands that mean a lot to many different people.”

In order to protect and preserve these lands devotees our national parks must ultimately come to recognize the importance of making wild places relevant and accessible to as many people as possible. Seemingly less obvious than many of the other rights people of color have fought to achieve, access to public lands can only be realized when its value is made clear and we demand it.  As surely as we embrace our liberty as citizens Ranger Johnson said we must embrace our national parks. And here is where all Americans will witness the final act of the civil rights movement.

” If Martin Luther King were alive today he would be first and foremost to say we as a people need to go to Yellowstone. We need to go to the Grand Canyon,” he said. “Because if this is America’s best idea and we played a role in its creation how dare we not choose that for ourselves.”