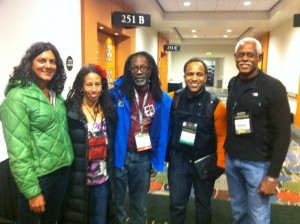 For the first time a team of African-American climbers is assembling to make a bid for the summit of the tallest peak in North America, Mount Denali. To be lead by the National Outdoor Leadership School in 2013 this expedition aims to encourage minority youth to enjoy outdoor recreation as part of an active lifestyle as well as create a cadre of role models for careers in environmental protection.

Also known as Mount McKinley at 20,320 feet Denali is the highest physical point anyone can reach in the United States. And as a metaphor, this mountain also represents exactly what a person in this country can achieve, the literal height of ambition. Unfortunately far too few people of color in our nation are likely to attain it. But with a bold plan to achieve their lofty goal this group of adventurers aims to inspire a new generation to ascend beyond their life circumstances to accomplish something greater than themselves.

“For many of our NOLS grads the experience has been so meaningful to them that they went on to do great things,” said Aparna Rajagopal-Durbin diversity and inclusion manager at NOLS. “There are studies that show that being outside really changes your view on education and achievement.”

NOLS offers wilderness leadership training opportunities all over the world. But statistically there is a profound gap in rates of participation among African-Americans when it comes to spending time outdoors. As a percentage of the U.S. population blacks and other ethnic minorities engage in outdoor recreation far less frequently than whites. And as our population shifts to favor a non-white majority, as predicted to occur in 2042, organizations like NOLS are beginning to recognize the need to more actively encourage people of color to get involved.

“We’re not attracting a diverse demographic of students and our staff does not reflect the changing demographic of the U.S.,” said Rajagopal-Durbin. “It was a shock to me that we had 3 black instructors in a pool of several hundred instructors world-wide.”

Called ‘Expedition Denali: Inspiring Diversity in the Outdoors’ the NOLS project aims to create a high-profile event that will help to demonstrate the passion and opportunities that exist in the African-American community for climbing and hopefully prompt others to participate. Though not in itself a first ascent this expedition will be the latest in long succession of groundbreaking trips to the summit.

It’s not as if no one has ever climbed Denali before. In fact scores of people make it to the summit every year. Since Alaska native Walter Harper first climbed it in 1913, approximately12,000 individuals have seen the view from the top. In 1947 Barbara Washburn became to first woman on Denali’s peak. And over the last 100 years all manner of other ‘firsts’ have been achieved. But try to find a reference for the first African-American to summit Denali and you’ll be hard pressed to discover a single name.

To be fair the American Alpine Club doesn’t account for race when recording the successful summits of the world’s mountains. And the National Park Service as a federal agency does not collect that information when issuing permits. As a culture the mountaineering community perhaps best exemplifies the dream of Martin Luther King Jr. in which men and women are “judged not by the color of their skin but the content of their character.” And John Muir implied no restrictions of race when he said, “Climb the mountains and get their good tidings, nature’s peace will flow into you as sunshine flows into trees.”

Roped together on a high peak the ancestry of one climber over another matters little when the line pulls tight in a fall and all that stands between life and death is the strength and skill of that person on the other end. So why then now should it matter if a single African-American in particular or for that matter an entire team ascends to the summit of Denali? 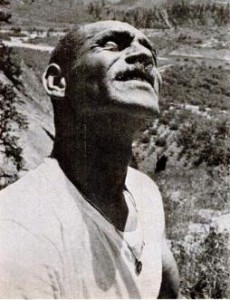 At it’s core climbing has always been about firsts. The rush to plant a flag on the summit of big mountains had spurred the pride of nations around the world throughout the 20th century. Even during our global military conflicts and the economic strife of the great depression men and women dreamed of escape to high places and the elemental reward of deliberately pitting their courage against the impartial tests of nature. In 1964, the same year the Civil Rights Amendment was signed into law, Charles Crenchaw, an aerospace administrative assistant from Seattle, became the first African-American to summit Denali. At a time when many people of color in the U.S. could neither vote nor travel freely, when segregation restricted rights of association and public gathering, this one man found freedom in climbing. 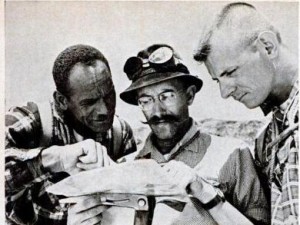 Part of an 18-person team Crenchaw helped to make mountaineering history. The 1964 Mt. McKinley Expedition then claimed the largest party to reach the summit in a single day, 15 climbers including the 4th, 5th and 6th women. It was also on this trip that the highest radiotelephone transmission was sent and received. Though accomplishments we may now take for granted these events were the steps necessary to get us where we are today and as they have been throughout all endeavors in our nation’s history African-Americans were there to play a role.

Almost 50 years later there are firsts that remain unaccomplished. Since Crenchaw first climbed Denali there have been other African-Americans to follow in his footsteps. But there has never been an expedition made up primarily of African-Americans climbers. And now that NOLS has taken on this particular challenge some will likely ask the cynical question, why does it matter?
“It matters because this is how you influence young people,” said Philip Henderson one of NOLS’ 3 African-American instructors. “Go to Everest and you’ll find the first Slovenian woman, the first Chinese woman, the first blind person, the first person with diabetes. And when it comes to the first African-American person and you ask who cares? It drives me to say, WE care.”

Those individuals who self identify with any particular group will inevitably define their goals and accomplishments based on those who came before them. Young people especially will model their behavior on those most like themselves and will mark their progress against the achievements of the previous generation if only to know how far they’ve come. And in the case of mountaineering with few role models to guide them many young African-Americans can’t even know where to begin. 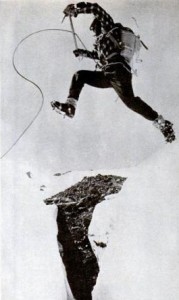 “I’m not going to say that I didn’t have mentors coming up because I did,” Henderson said. “But without role models, people who are like me who came from where I came from I had to pretty much figure it out by myself. And that’s a lonely place to be.”

The purpose of the NOLS Denali Expedition is to create a nurturing environment where people color can learn from those who came before them. Less important than the actual summit is the journey this team of climbers will take to get there, a route that those of similar backgrounds can emulate and follow. With the support and encouragement of a new community black climbers NOLS aims to inspire the next generation of young people to imagine themselves empowered with the knowledge that they are not alone and that there are no heights to which they cannot reach.