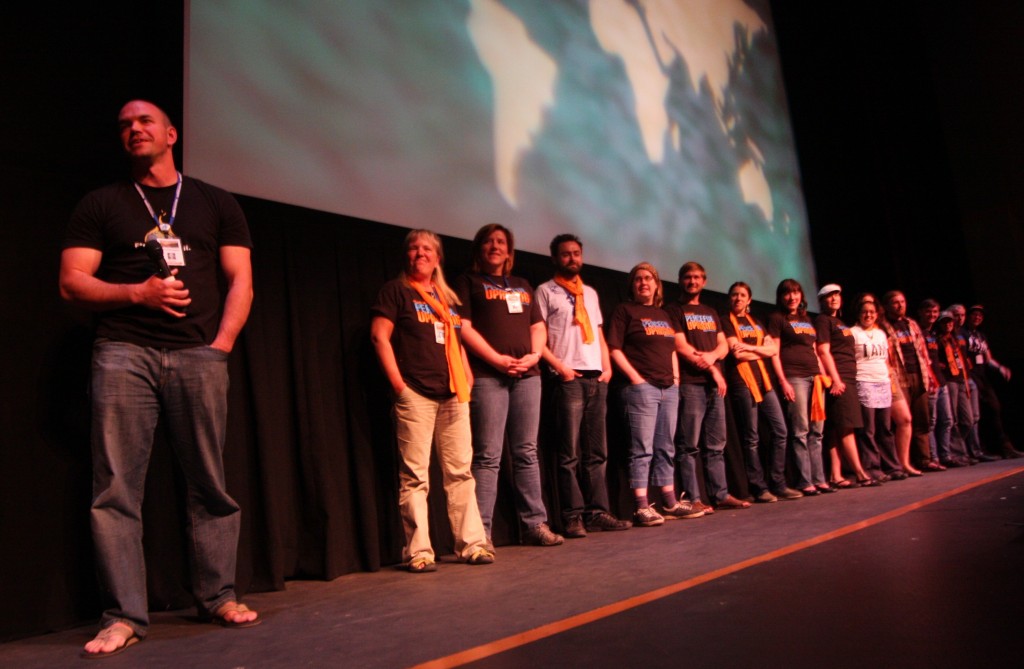 For his stand to protect wilderness environmental activist Tim DeChristopher got a two-year prison sentence. But the man trusted to manage the finances of his non-profit Peaceful Uprising walked away with considerably more. Steve Sugarman executive director of the fiscal sponsor organization the International Humanities Center is being sought in California by state and federal authorities. His group is believed to have misappropriated almost $1 million in charitable donations contributed to DeChristopher’s and more than 200 other philanthropic organizations nation-wide. A story in the Los Angeles Times puts the total at $877,000. Though he came highly recommended by many Sugarman seems to have played on the trust of the most giving to bilk do-gooders out of their cash in a Ponzi-scheme worthy of financier Bernie Madoff.
When DeChristopher put a stop to the auction of public land in Utah he was convicted of a crime. But his acclaimed act of civil disobedience, which aimed to hold the oil and gas industries accountable for their role in climate change, created a national movement. Peaceful Uprising now works to raise the stakes in the effort to end global warming. But like any philanthropic organization the group of activists still has to cover expenses. And with the help of a fiscal sponsor it works within the law to raise money and prompt public action to achieve social change. But little did the non-profit realize the cash it collected from donors was vulnerable to theft.
Under its status as a 501(c)(3) organization a fiscal sponsor helps non-profits legally collect and distribute tax-deductible funds contributed by the general public. For a fee ranging between 3 and 20 percent the sponsor pays the group’s bills and satisfies its obligations to the federal government. It’s common practice for a small activist organization to outsource these particular duties and Sugarman’s International Humanities Center had many satisfied customers.
“They had a great reputation with different climate organizations, women’s justice organizations. And after talking to a few different people everyone said these were the people to go to,” said Cori Redstone of Peaceful Uprising. “And at first they were really responsible. We could get a hold of them and they were taking care of things.”
But all that changed late last year as things slowly began to unravel. Redstone’s group became aware that several of its employees were not being paid.
“A lot of our phone calls went unanswered as well as our emails,” she said. “We got less and less communication and finally sometime in December we were finally able to get a hold of Steve Sugarman, who gave us a round-about story and started acting erratically. Finally he told us that they were shutting down.”
With $35,000 in unpaid bills and a total of $88,000 in donations unaccounted for Peaceful Uprising received notice that the Center was going out of business. The Los Angeles Times reports that Sugarman told some executive directors of effected non-profits that he “blamed the problems on the economic downturn and an anticipated $15.2-million grant that never materialized.” But as the Times reports he neglected to inform his clients that the IRS had filed a $69,570 tax lien against the Center. And In September 2011, the California “state Franchise Tax Board suspended the Center’s corporate status because it had failed to file the nonprofit equivalent of a tax return.”
Now that his clients and law enforcement are looking for him Sugarman is nowhere to be found. And each non-profit is left to figure out how they will ultimately recover.
“It’s going to take a long time to replace this money,” Redstone at Peaceful Uprising said. “But regardless of what happens we’ve always been a volunteer organization. We’ve very rarely had many funds to draw on and so we know that we will go on and continue to do the work that we do. We’ll just have to scale back a little bit.”
The same is likely true of many of the effected groups. Operating on shoestring budgets they’re unfortunately used to this kind economic hardship. But despite this experience non-profits will still need to rely on fiscal sponsors to manage their money in the future.
“The reason they’re doing this is they don’t want to take on the financial responsibility themselves,” said John Sterling, executive director of the Conservation Alliance, a non-profit that funds environmental protection initiatives throughout the United States. “These groups are usually high on passion and low on experience when it comes to governance. But you’ve got to do your homework and ask a lot of questions in the non-profit world.”
As the situation in California unfolds charitable organizations will likely use this as a teaching moment. Not to distract from their important work they must recognize that despite their selflessness they are still  vulnerable to deception.
“People in the non-profit sector are very empathetic and trusting which makes us the perfect target for this,” Redstone said. “The best thing to do is to just be totally transparent and be open with our donors as well as be open with the non-profits and let people know that this does happen.”
It remains to be seen whether Sugarman intended to steal his clients’ money from the outset. Some speculate that he perhaps over extended himself in a frenzied rush to have non-profit contributions keep pace with expenses. His best intentions not withstanding the money is apparently gone and it’s not coming back.  When you play fast and loose with the funds and resources of others you’ll always run the risk of coming up short. Just like in a game of musical chairs as players shift from one seat to the next those without the skill or experience to avoid it will be left standing alone with nowhere to go when tune suddenly stops and jig is up.
The Joy Trip Project is made possible with the support of sponsors Patagonia and The Outdoor Retailer Winter Market