Screen like it's meant to be seen – The Joy Trip Project 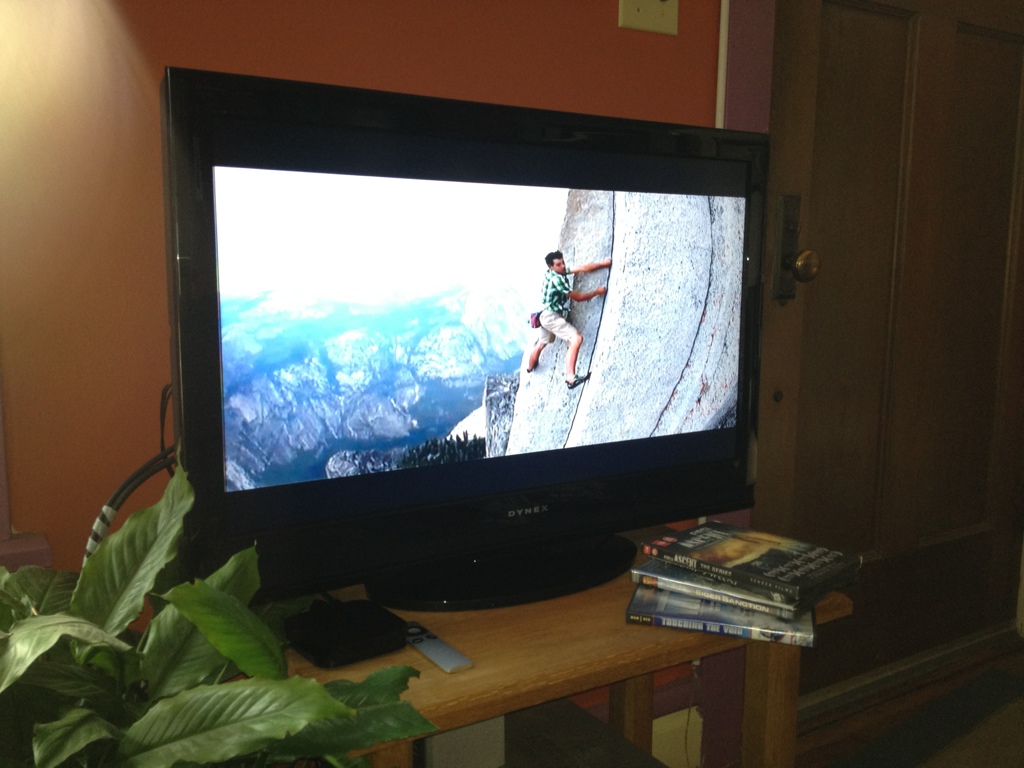 Adventure filmmakers everywhere rejoice! I finally invested in a flat screen television. Be assured. Now when I get those DVD advance copies or streaming video online access codes I’ll have a decent screening facility to comfortably watch and evaluate the latest movies inspired by adventure or environmental activism. And since the price of a good 32-inch LCD High Definition monitor has come down to levels any dirtbag with cash for crash pad can afford, fans of independently produced adventure media should do themselves a favor and make the purchase to screen these great films like they were meant to be seen.
I’ve been reviewing adventure media for a while now. Movie producers send me new films just about every week. If I get a DVD I used watch it on my crappy 17-inch analog TV set or sitting at my desk on my wide-format iMac.  If it’s on Vimeo or YouTube I’ll definitely use the computer or lately my iPad2. On a modest budget I’ve struggled to create just the right screening space in my home, especially after I succeeded in pissing off Ken Burns.
Yeah THAT Ken Burns, creator of great documentary films like ‘Jazz’, ‘The Civil War’ and ‘Baseball’. His people sent me an advance copy of the 6-part mini-series ‘The National Parks: America’s Best Idea,’ which I watched with great interest on my crappy TV set. When Burns and I connected in person at the Mountain Film Festival in Telluride where the series premiered I congratulated him on his fine work, but apologized for not being able to make it to each of the 2-hour theater screenings over the weekend.
“Yeah, sure,” he said. “You’ll probably just watch it on your laptop.”
He wouldn’t even look me in the eye. In my defense I had about 30 other movies to watch at that festival with multiple screenings that overlapped. Plus I had to stand in line to get tickets while working at arranging interviews with the other filmmakers. But even though I had already seen Burns’ movie, and written about it extensively, he had every expectation for me to watch it in a big-screen theater with a live audience, the way it was meant to seen.
These days that’s a lot to ask of anyone.  Not everyone can make it to Telluride for Mountain Film or Banff or Boulder or Vancouver. And even when these festivals go on tour and appear in major cities around the world audiences won’t necessarily be able to make it to those theater screenings that are growing more popular every year. Most often DVD and online viewing are the only options. But when that is the case a little bit of affordable technology goes a long way toward making the experience pretty damn good.
I bought the Dynex 32-inch LCD TV for a $219 at Best Buy. Outfitted with an Apple TV black box for $99 I have access to all my online media watching options that include Netfilx, Vimeo and YouTube, not to mention all my computer stored music and photos. Now, rather than pulling down videos with my iPad2 propped between my knees on the couch I can sit and watch a series of adventure media pics in relative comfort and frankly so can you. It’s cheap and easy. And as more people continue to watch, filmmakers will be inspired to create ever more entertaining content to keep your interest riveted. Just remember to stay inspired and be sure to get your ass off the coach and into the outdoors for a few adventures of your own.