11 Nov 'Spoil', on the path of the Spirit Bear – The Joy Trip Project

Every initiative to protect the environment needs a charismatic poster species. When it comes to the controversial tar sands debate that endangered animal is the rare and genetically unique Spirit Bear. A black bear with a recessive gene that turns its fur white is the star of the award winning film Spoil. And with fewer than 400 remaining in the wild the Spirit Bear is at the heart of reasons why activists aim to preserve the pristine Great Bear Rainforest of British Columbia. 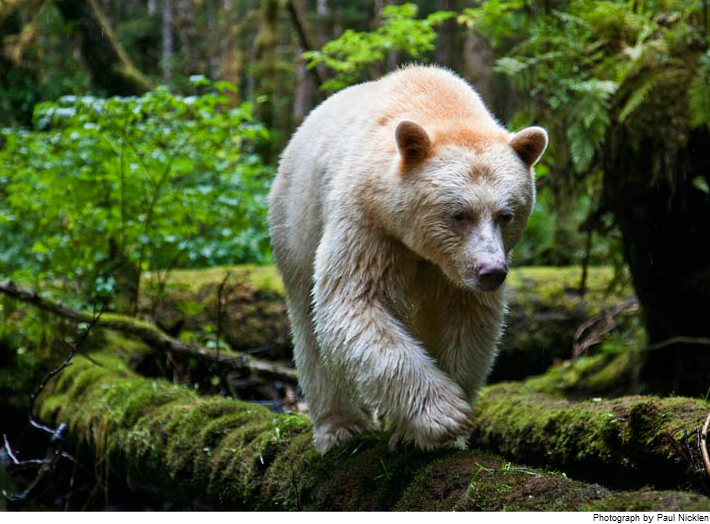 Produced and directed by National Geographic filmmaker Trip Jennings and co-produced by Andy Maser, Spoil is the end product of a Rapid Assessment Visual Expedition. Know simply as a RAVE an elite team of photographers descend upon this at risk habitat with SWAT team tenacity and precision. Members of the International League of Conservation Photographers capture images that tell the story of what exactly the world will loose when our appetite for petroleum out weighs the defense wilderness.
Spoil took the 2011 Banff Mountain Film Festival award for Best Film on the Mountain Environment. The documentary depicts one of the few remaining ecosystems where a wild forest meets a wild ocean and native people continue to live sustainably drawing renewable resources from the land. It’s safe to say that this region is unspoiled and would remain so were it not for political and industrial pressures that aim to destroy it.
The home of the spirit bear lies along the shortest path of a proposed pipeline to sea that will fill tanker ships with tar sands oil bound for foreign markets in Japan and other parts of Asia. Though not directly at risk of tar sands mining the Great Bear Rainforest might well be vulnerable to a massive oil spill like those in Alaska and the Gulf Coast. The filmmakers of Spoil suggest that the tar sands pipeline and the ships that haul the oil away will likely cause irreparable harm should an accident ever occur. With images of the Spirit Bear and the wilderness in which it lives viewers are made to ask themselves, “Is it worth the risk?”

As demand for domestic sources of petroleum continues to grow so does the threat to the environment. And remote regions like the Great Bear Rainforest will ultimately be the proving grounds of our resolve to find a worthwhile solution to our dependency on oil regardless of where it comes from. Spoil offers up a genuine assessment of what’s at stake and reveals to us the true cost of cheap gasoline. ~ JEM