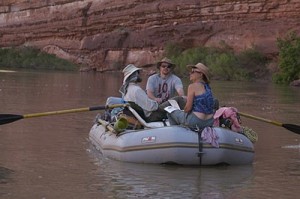 On NPR’s All Things Considered veteran public radio reporter Alex Chadwick tells an intimate story of environmental activist Tim DeChristopher. Before he was sentenced to two years in federal prison for an act of civil disobedience DeChristopher and Chadwick spent several days together on a whitewater rafting trip.
Chadwick: Every time you write a piece you have to kind of figure out what the piece is about what the story’s about. I actually finished this piece before I really understood what it’s about. It’s about two guys in trouble who go done a river.
DeChristopher had been convicted of disrupting a Bureau of Land Management auction of oil and gas drilling leases on property adjacent to two national parks in the state of Utah.
Chadwick: So he was waiting to be sentenced and I was going through struggles of my own that had to do with the loss of my wife and I my just feeling lost and kind of uncertain about really everything. And the two of us go down this river together and just have an experience and adventure.
Chadwick had recently lost his wife National Public Radio producer Carolyn Chadwick. And on the invitation of river guide and activist John Weisheit he and DeChristopher made a long journey down the Colorado River through the rapids of Cataract Canyon. In the time that hey spent together two men shared their stories in a piece for radio called the Descent. On this trip DeChristopher ponders the sacrifices we he made, everything he’s given up to protect the environment.
DeChristopher:
And I started to accept that in a lot of ways I have nothing to loose by fighting back because I’ve already grieved the loss of everything that can be taken away from me.
Chadwick:
Everything. Carolyn loved being outside. She loved the rivers, the west the way the night ski here makes star galleries. We were coming some day. We were coming to the river and she wouldn’t be scared. She was afraid of her end sometimes. But she almost never showed it. She didn’t want to talk about it. I’m on this journey because of her. John Weisheit knows what I lost and he thinks the river is transformative, healing maybe. I’m carrying a recorder and making notes and talking with time out of habit, or maybe to learn that I still can.
Clearly Chadwick hasn’t lost his touch. And in the Descent he paints a picture of DeChristopher that provides an alternative view of the calm serious activist so willing to lay down his freedom.

Chadwick:
I saw on the river a different side of him a lightness a sense of fun and pleasure and laughter that’s absent from his life in Salt Lake City as an activist. He had a good time on the river. He had a really good time as did I.
—
You can listen to Chadwick’s piece the descent on the KCRW public radio program Unficitional, with a revised version also available at the NPR show All Things Considered. 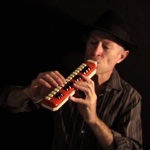