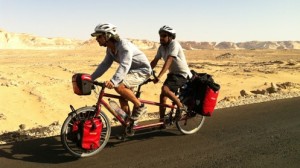 The latest installment of the random tandem adventure travel series by Dominic Gill and Encompass Films premieres this week at the Adventure Film Festival in the United Kingdom. “Take A Seat Egypt” peddles across the North African Sarah Desert to bring the story of this most ancient civilization as it makes the transition to democracy through non-violent revolution. In his third feature film Gill once again rides a tandem bicycle over 3,000 miles in the scorching sun while allowing random strangers to take the back seat and come along on the ride.

Close on the heels of his most recent film “Take A Seat, Sharing a Ride Across America,” Gill put together this 52-day journey with producer Nadia Boctor to record the impressions of people involved in the massive demonstrations taking place in the Egyptian city of Cairo. Heading out directly from Tahrir Square with the help of a few passionate riding companions “Take A Seat Egypt” illustrates the lives of those directly engaged in transforming their nation.
” When I cut this preliminary short – answering the call of the Adventure Fest in the UK – the 19:6 images of the desert and the Nile and the sounds I had traveled through made me realize how special this journey had been,” Gill said in a recent exchange on Facebook. “Not only did I see amazing places (and capture them on film with the help of my crew!), and rub shoulders with some incredible people, I did it at an important time in political history, and I am grateful to have seen that first hand.”
Soon to be distributed in North America “Take A Seat: Egypt” will likely make the U.S. adventure media festival rounds through 2012. ~JEM