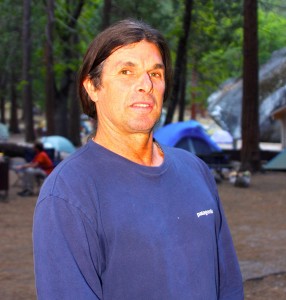 Ron Kauk is one of the best known climbers in Yosemite Valley. He was among that early generation of big wall pioneers that set the standards and established the major routes that are still popular today. Since 1974 he’s been a regular in the Yosemite climbing community. Having made the first free ascent of Washington Column in 1975 with John Long and John Bachar Kauk renamed the route Astroman and it became the most challenging climb in the Valley for more than 10 years.
On a joy trip out to the west coast this summer I had the chance to meet Kauk and talk to him about his younger days in Yosemite.
“For me it was like entering this incredible world of granite and rivers and trees and this interesting like-minded group of people in this place we’re sitting in which is camp four,” Kauk said. “It was colorful and energized with this enthusiasm to climb but also live simply. To think that you could walk in and feel so comfortable and belong to this group and inspire each other just out here on these boulders … or out there on those big walls once you learned the fundamentals.”
It’s been more than 30 years and Kauk is still climbing in Yosemite. With a life philosophy that includes a deep and abiding appreciation for nature he continues to inspire young people through a non-profit called Sacred Rok. Making the connection between spirituality and the preservation of wild places he’s taking the sport of rock climbing to a whole new level.