An interview with writer and explorer Jon Turk 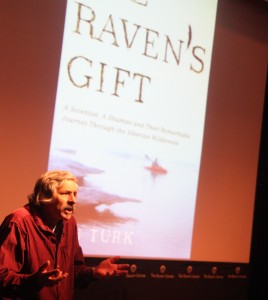 Many of us put a lot on the line for the sake of adventure. And for writer and scientist Jon Turk the decision to paddle a kayak across the Pacific Ocean from Asia to North American was in keeping with a tradition of discovery as old as humanity itself.
“You look for an audacious and bold plan that’s still feasible,” Turk said. “You look to be vulnerable and at the same time secure. And at that time, which was about 10 years ago now nobody had successfully crossed the Pacific Ocean in a standard production off the shelf-kayak.”

Turk had a dream to paddle more than 3,000 miles across a vast ocean. But he would later realize that he was actually tracing a migratory route he believes was followed by ancient humans thousands of years ago. And it kind of makes you wonder why anyone today or way back when would ever to do such a thing.

“We all agree that migration is difficult,” Turk said. “It’s difficult to get into a canoe, to leave your homeland with deer in the forest, seals in the bay, with salmon in the streams and paddle three thousand miles across the arctic in the middle of the ice ages.”
If it’s so difficult again the question then as it is today is why? The anthropologist will tell you that because we are a pragmatic people the only reason why we would do something that difficult, paddle 3,000 miles across the ocean, is if we are force out of our homeland by warfare or starvation or lured into more productive hunting grounds by a more productive place. In other words it was beaten up, famished people who had just lost a war escaping for their lives. But Jon Turk doesn’t believe that. 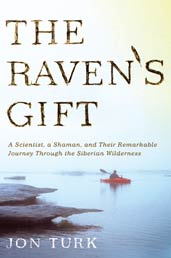 “I don’t believe that on two grounds,” he said. “First of all it’s such a hard trip that if you started out beaten up weakened, famished loosing most of your warriors in a battle you’re going to die. Second of all I think the hardest and most audacious journeys are following dreams, not pragmatic reasons. Pragmatism will get you so far. But the dream will get you farther.”

So following his dream Jon Turk ventured out across the ocean and along the way he discovered a few interesting ideas about the very nature of adventure. And his book, The Raven’s Gift he explores the power of risk and vulnerability as a way for travelers to experience magic.
The Raven’s Gift is published by St. Martins Press