26 May Mountain Film Minus Mortenson – The Joy Trip Project 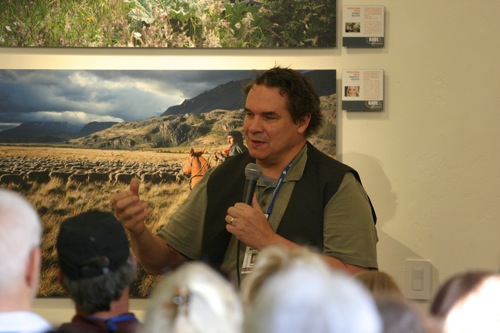 I’ve personally shared two cups of tea with Greg Mortenson. This weekend I had hoped to have my third and enjoy another conversation with a man who has inspired me along with millions of people around the world. But that’s not likely to happen. Though the invitation remains open Greg won’t attend the Mountain Film Festival at Telluride after a devastating expose weeks ago on the CBS news show 60-Minutes. Accused of fraud and deception the subject and co-author of the best selling book “The Cups of Tea” is persona non-grata.

Festival organizers appear to have distanced themselves from a longtime friend and seem to side with Greg’s accusers. An article in local paper The Telluride Daily Planet raises concerns they may have been duped.
“How many people bought ‘Three Cups of Tea’ in Telluride?” asked festival director David Hollbrook in the story. “My god … I really hope we weren’t part of a scam.”
I still reserve judgment and had hoped, as many would, to get Greg’s side of the story. His defense in a recent Outside Magazine article helped to clear the air. But an intimate gathering like Mountain Film might have been an even better opportunity to understand true circumstances of this story. And even though Greg won’t be at the festival his presence will likely be felt as the elephant in the room as we collectively discuss this year’s theme turning “Awareness Into Action.”
For many, myself included, Greg’s story in “Three Cups of Tea” was a prime example of how one person could make a profound difference in the world. And even if the accounts of his adventures in Pakistan are untrue, his story inspired others to take action and accomplish many amazing things.
Shannon Galpin, executive director of Mountain 2 Mountain, first told me about Greg. She was inspired in part by “Three Cups of Tea” to begin her own non-profit to create educational opportunities for the women and children of Afghanistan. And Shannon Wilson, founder of Imagine 1 Day, let me know that her work building schools in Ethiopia was also encouraged by accounts she read in Greg’s book.
I know from countless conversations with people across the United States that their philanthropic spirit was empowered by the idea that their actions could be made to directly impact the wellbeing of those less fortunate. It’s these conversations that abound throughout the Mountain Film Festival weekend. And whether Greg attends or not I believe that it vitally important to recognize that stories like his, though based fantasy or reality, as long as they inspire are indeed what transforms our awareness of need into the action required to fulfill it.