23 May Mountain Film Inspires Me – The Joy Trip Project 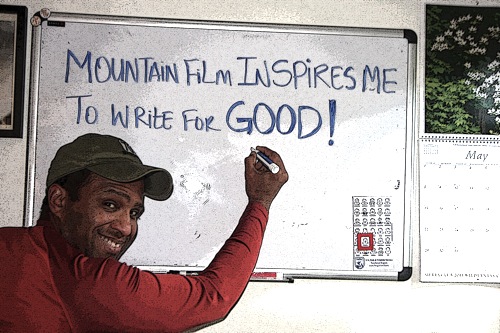 Mountain Film inspired me to be a writer for good. I actually came to the world of journalism predisposed to telling stories about people working toward the benefit of others and the preservation of our planet. But the annual celebration of adventure culture in Telluride, Colorado has helped to focus my attention and create a conversation about how we all might do good in the world, to ask the question: how are you making the world a better place?
As a reporter I’m prompted also ask that question of myself. I try to learn by example from the many incredible people I have had the pleasure to interview. This year themed “Awareness into Action” Mountain Film brings together the world’s most exciting lifestyle artists, athletes and activists to share in the wisdom of doing good. With plenty of books, films and images to share the organizers challenge us in the audience to see how well our own awareness and actions are reflected in the stories that unfold.
Over the years Mountain Film has inspired me to take a look at how my writing and reporting might make a difference in how others see the need for change around the world. My friend writer and climber Majka Burhardt helped me to muster up the courage and resources necessary to travel with her to Ethiopia last fall to report on a groundbreaking initiative called Imagine 1 Day. This Canadian-based NGO builds schools in one of the most impoverished regions of the world. While there we also visited with Dr. Rick Hodes, the subject of the book and film “Making the Crooked Straight.” I had the opportunity to spend two days at his clinic in Mother Theresa’s Mission for sick and dying destitutes in the Capital Addis Ababa. We also visited one of Dr. Geoff Tabin’s optometry clinics in the city of Mek’ele, where he and other docs work to treat cataract-related blindness.
Last year at Mountain Film the Oscar –winning director and ocean activist Louie Psihoyos encouraged me to do more than just report the news. The creator of the film “The Cove” said, “You need to do more than just tell the story. You have to be part of the solution that makes change happen.”
I’ve learned about the impact of climate change from people like Bill McKibben, author of the End of Nature and the founder of 350.org. National Geographic photographer James Balog showed me the impact of melting glaciers through the Extreme Ice Survey project. From poet Terry Tempest Williams, author of “Finding Beauty in a Broken World” I discovered that the irradiation of an animal species like Utah prairie dog is no less tragic than the slaughter of millions in the Rwandan genocide. Bidder 70 activist Tim DeChristopher taught me that one person can make a big difference in protecting the environment when they stand up against corporate greed. And Andy Bichlbaum of the Yes Men! showed me that through humor and guile anyone can speak truth to power and make the world take notice.
Mountain Film inspires me. And my mission through the coming days this week is to bring to you some of the lessons I learn through this wonderful exchange of ideas. In my own style of storytelling I hope to share with you many examples of people who have indeed taken their awareness of need and transformed their desire to do good into actions that result in positive social and environmental change.
How does Mountain Film inspire you? Drop a note or a photo on facebook at: https://www.facebook.com/mountainfilmtelluride
Social media coverage of the Mountain Film Festival In Telluride is made possible thanks to the support of sponsor Patagonia