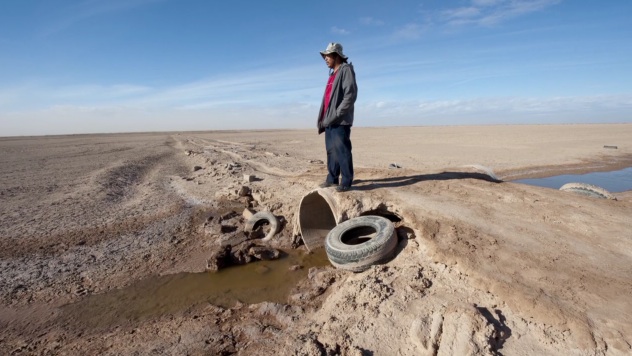 Just how do you loose a river? In his new film “Chasing Water” National Geographic Photographer Peter McBride follows the course of the Colorado only to see it disappear. As much as we might get ourselves lost in the details of the science behind this frightening phenomenon, McBride allows us to make a personal connection with a rapidly depleting natural resource, fresh water.

From its source high in the Rocky Mountains near where McBride grew up, the Colorado forges a path through the arid west to provide water for more than 30 million people. Paddling boats along part of the journey south with river protection advocate and writer John Waterman the photographer gives us a visual perspective from which to see how this great river is slowly drying up. Though it once bisected the United States flowing freely to the Sea of Cortez, the Colorado hasn’t reached the ocean since 1998. Today it fades to a dry riverbed 90 miles from where it had once concluded a cycle 6 millions years in the making.
A combination of still images and video by McBride and live footage shot by Anson Fogel “Chasing Water” is documentary that doesn’t weigh the viewer down with a lot of facts and figures about the world water crisis. Instead it offers up a record of how the many communities along the Colorado and its tributaries draw down the flow until there is nothing left.
A call to awareness, the film that premieres this weekend at the 5Point Film Festival is a photo essay of sorts that gives McBride’s view of how water makes its way from snowmelt at 13,000 feet to the sea. Spolier alert. It doesn’t.