A walk in the park with John Muir

19 Apr A walk in the park with John Muir 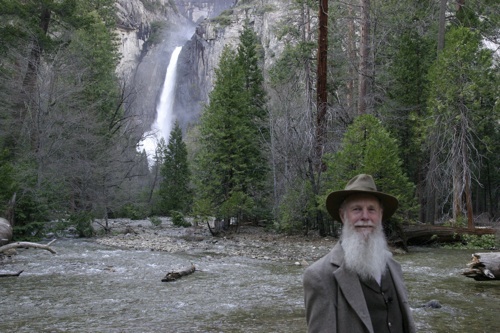 Yosemite Valley California, president day: I’m walking with my recorder along a wooded path with a long bearded man wearing period clothing circa 1890, a tweed coat, a wool vest with a red pocket square and wide brimmed hat. Ahead of us is Yosemite Falls, a massive flowage of water running white and fast, churning with melted snow from the high country upstream. The man describes a fanciful vision of what we see.

“Can you imagine? Can you imagine if in the midst of its headlong descent with all this whirling fairy springtime spray and those rushing comet tails that the fall was suddenly frozen solid and then carried bodily out into the middle of the valley that we might go around it and see it from all sides in the sunshine,” he says. “Oh was a show it would make. This colossal white pillar half a mile tall adorned with airy flowing drapery as if chiseled out of white marble.”

Who better with whom to tour one of America’s greatest National Parks than the man himself John Muir. As if transported back in time I had the rare opportunity to get his impressions on Yosemite today.
“Look at these high granite walls lying about 5,000 feet above sea level. With all the plant people and fellow mortals this good planet provides in this particular place makes it a very sacred place indeed,” he says. “It’s a true temple, a temple I think people would need to thrive in. And those who visit it now-a-days will have an opportunity to because it’s been persevered for so long and so carefully by so many. It is a great pleasure indeed to have it remain for all of us for our own health and vigor.”

Our National Parks began as idea. They are monuments to the notion that all people no matter their degree of wealth, social status, race or ethnicity have a fundamental right to commune with natural world and receive the life affirming benefits of wild and scenic places. Today we visit Yosemite and talk to historian and actor Lee Stetson who in voice of John Muir explains why our National Parks are indeed America’s best idea.

Stetson appears as the voice and image of John Muir the PBS television documentary film series “The National Parks: America’s Best Idea” by Ken Burns. To find out when the series will air in your community visit PBS.org/kenburns.

Music this week by the Conductive Alliance

The Joy Trip Project is made possible thanks to support of our sponsor Patagonia.