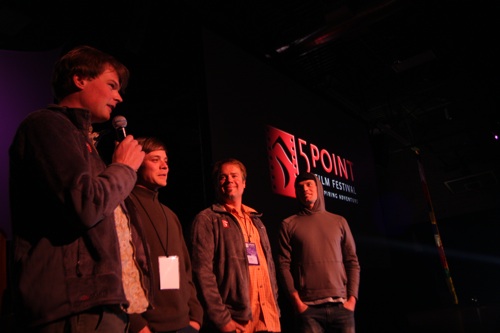 True passion is infectious. And when it comes to making adventure movies you know you’ve succeeded when you can inspire that passion in others.
The second day of the 5Point Film Festival hosted yet another night of incredible motion pictures. And in advance of their screening the organizers gathered an intimate dinner for special guests and many of the filmmakers. Even though I’ve had the pleasure of meeting most of these talented men and woman many times before, when Eastern Rises stars Frank Smeatherst and Ryan Peterson walked into the room I was down right giddy.

Typically not one to geek-out, I was excited to meet these guys. Having twice seen their adventures through the Kamchatka Peninsula of Far Eastern Russia I was genuinely inspired not necessarily by their story but the deep passion and enthusiasm that’s conveyed in their film. But what’s truly amazing is that they infected me with a sincere interest in something that I once considered exceptionally boring. Now I can’t wait for my next opportunity to go fly-fishing.
Eastern Rises is an exciting film about a once-in-a-life-time trip to cast rods in one of the last remote regions of the world. Charging in on Soviet era military helicopters to catch and release some of the biggest rainbow trout you’ve ever seen Frank and Ryan make fly-fishing not only interesting but exhilarating and –yes I’ll say it- sexy! For the first time I could truly understand why people love to fish. And if a filmmaker can turn a cynic into a true believe that person has done something truly great, transporting someone somewhere they never imagined they would ever go.
The second night of 5Point was full of experiences like that. Sean Mullens was in the audience to introduce his film Birthright. One of the first movies ever reviewed here on the JTP this beautiful black and white film unfolds to tell the story of a paraplegic surfer who still rides waves near his home each morning with a paddle and specially designed kayak.
A big surprise this year was a film that takes us to hardened streets of East Oakland, California. Scrapertown demonstrates the transformative power of art in the expression of physical activity. Customized bicycles called Scrapper Bikes created by rapper Baby Champ provide young people in his community a way to express their individuality and get a little exercise. A guest of 5Point Champ led the crowd in likely adventure media’s first ever rap-a-long.
Coming all the way from Ireland Mickey Smith brought his stunningly poetic film Dark Side of the Lens. A short movie that’s become of a Vimeo sensation, Smith exposes the raw passion behind his love of surf and capturing curling waves on film.
Newly released by Skip Armstrong, the film Season: Winter belies the notion that white water kayaking is exclusively a spring summer fall activity. If you think about it, snow is white water too. And this beautiful movie shows that weather is no barrier to passion.
Taking the finale spot Nick Rosen of Sender Films battled his way through bumper to bumper traffic on I-70 from Boulder to share his movie about speed climbing phenom Ueli Steck. The Swiss Machine details the obsession of one man’s quest to set a record pace up the iconic north face of the Eiger. With some of the most captivating cinematography at the festival this film takes adventure inspiration to a whole new level.
Two more full days of programming remain. 5Point is only just getting started.