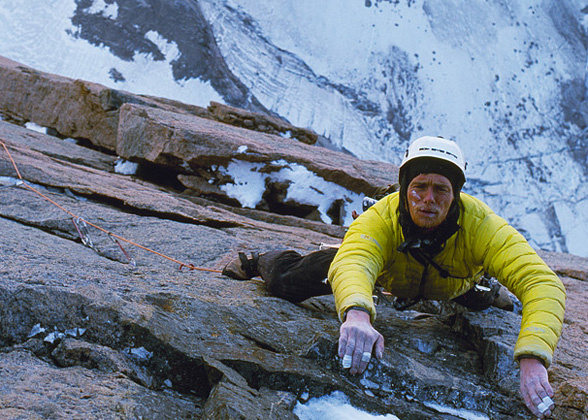 In the best mountain adventure films a successful summit bid is never a forgone conclusion. Throughout the 15-pitch climb of The Asgard Project, a movie by Alastair Lee, you’re left wondering, “Are these guys are going to make it?”
That riveting sense of anticipation will keep viewers on the edge of their seats. And though it received the prize for Best Film on Climbing at the 2010 Banff Mountain Film Festival even those with no alpine aspirations will enjoy The Asgard Project. It’s simply a great piece of cinema.
The feature-length flick follows the ambitious journey of British climber Leo Houlding as he and a small team ascend the north face of Mount Asgard, a twin-peaked rock wall on Canada’s Baffin Island. The 6,611-foot route is a mix of highly technical free and aid climbing through icy conditions well below freezing. And as if that weren’t challenging enough, the final leg of the trip aimed to conclude with a wing suit BASE jump from the summit and a gravity glide flight back to base camp.
Right from the opening credits the film introduces a team of strong and compelling characters. Including Yosemite big wall climber Sean Stanley Leary and Carlos Suaréz from Spain, the crew sets the scene with a skydive approach from a cargo plane that dumps men and gear on the Baffin glacier via parachute. A quick cut away to training locations on cliffs in Italy, Spain and Yosemite Valley builds the pace of the story with breathtaking feats of climbing and BASE jumping as a prelude to main the event on Mount Asgard.
Formatted like a documentary The Asgard Project plays more like a mainstream action movie. With sweeping cinematography and a musical score composed in an orchestral style, the film offers up a dramatic yet uncontrived storyline. With a tempo metered out against the heart thumping rush of the ascent and the frustrating stalls of inclement weather Alastair Lee presents a reality play unencumbered by the minute details of a 14-day mountain siege. Instead viewers are made to enjoy fully engaged storytelling that excites from start to finish.

The Asgard Project is part for the Banff Mountain Film Festival World Tour and is available on DVD.