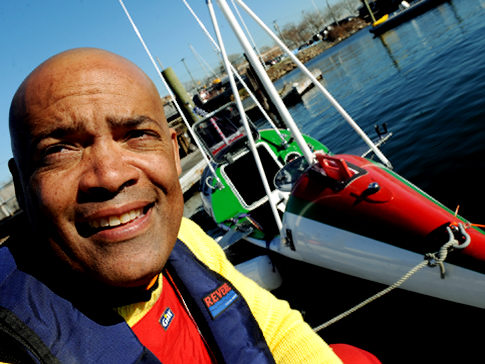 Adventure activist Richard Mooney is making plans to row across the Atlantic Ocean. On this World AIDS Day the 45-year-old man from Queens christened his 17-foot boat called “Never Give Up” at the Brooklyn Marina and hopes 5,000 supporters will Tweet their names in recognition of his next attempt to raise awareness for the continuing fight against the deadly disease. A journey of 5,000 miles, this will be Mooney’s third try to oar his way from Cape Verde Island off the coast of West Africa to New York City.
Originally planning to start his five-month voyage today, Mooney opted for the web campaign to get word out. His ocean-ready vessel is equipped with a solar power supply, wireless Internet and desalination gear. It’s being transported to his launch site where he’ll begin rowing in a few weeks. After two previously unsuccessful passages in 2006 and 2009 Mooney hopes this time things will be different.
“Until there’s a cure, we can’t give up in this fight for AIDS,” he told the New York Daily News.