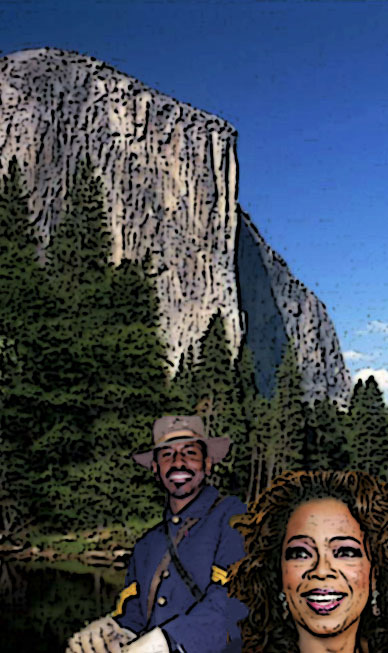 Yosemite National Park  Ranger Shelton Johnson was as surprised as anyone. “I was more than surprised,” he said in a recent phone conversation. “I was shocked. When the EMTs resuscitated me I was pretty much flat-lined.”
Standing outside the south entrance to Yosemite National Park, Johnson thought he was awaiting the arrival of six African-American women, all about to have their first camping experience. “I was told they’ve been friends since college and they were being reunited at a spa,” he said. “But unbeknownst to them they were being taken to Yosemite Valley for a camping trip instead. At least that’s what I thought.”

Johnson thought he was in on a clever plot to welcome a group of nature neophytes into the great outdoors. But the joke was on him.

“Here I’m expecting to meet these six African-America women and who shows but Oprah Winfrey and her friend Gayle King,” Johnson said. “I knew this was a project affiliated with her show, but to have Oprah right there in front of me was something else entirely. So yeah I was surprised, surprised in the best possible way.”
Oprah and her BFF Gayle did indeed spend an evening overnight in the Valley camping. Their experience in Yosemite will be included in two episodes of the Oprah Winfrey Show that will air tonight Oct 29th and Wednesday November 3rd. Johnson was flown out to Chicago to appear in the studio audience where producers of the program had apparently made up the stage as an authentic reproduction of the Yosemite campground complete with the pop-up camper used on the trip. With two-hours of high profile television devoted to boosting the National Parks Johnson hopes that more people, particularly people of color, will be inspired to visit and thoroughly embrace these wild scenic places for the national treasures they are.

“Oprah has the ability to influence trends in travel, where people go on vacation,” Johnson said. “But she didn’t just visit a National Park. What made this special was that she was camping. She didn’t do the Ahwahnee Hotel. She’s a billionaire and she went camping.”

This encounter with Oprah was a long time in coming. And Johnson, the only permanent African-America park ranger in Yosemite, couldn’t be more thrilled. Back in September of last year he and I sat talking in his office discussing what it would take to get more people of color to visit this and other National Parks. “If we could get Oprah or someone like Snoop-Dog to go camping it would change everything,” Johnson had said. “Then people would realize that being outside, visiting places like Yosemite is something that black people do.”

Ranger Johnson had written a letter to Oprah prior to our discussion inviting her to come out for a visit. There was no reply. But over the past year as his notoriety has grown with his prominent role in the Ken Burns PBS documentary “The National Parks: America’s Best Idea” he’s getting some much deserved attention. In the run-up to the film’s release in 2009 he received an invitation to the White House for a private screening with President Obama. And he’s been quoted in a number of news articles from the San Francisco Chronicle to USA Today. So a few weeks ago Oprah’s producers, apparently having dug his letter out from the bottom of the mailbag, gave him a call and set up a date to go camping.
Johnson is a national authority on the African-American experience in Yosemite. With his help I produced a short piece for the Public Radio International program “To The Best of Our Knowledge” on the contributions the Buffalo Soldiers, black horsemen of U.S. Cavalry at the turn of the last century, had made in the creation of National Parks like Yosemite, Yellowstone and Sequoia.  Over the course of many conversations Johnson and I have discussed a few of the reasons why more African-Americans don’t visit these sites today in greater numbers, despite their historical legacy. A primary issue we agreed is a lack of awareness. Johnson and others believe that a televised visit by the most powerful person in media, a person of color, might help.

“It will be like a lightening rod of awareness running through the country,” said Audrey Peterman a National Park advocate and co-author of the book “Legacy on the Land.” “We are such a celebrity conscience country that just the fact of Oprah going there telegraphs the information that this is something worth doing.”

By setting a positive example of a camping experience for millions of people in her audience, mostly women, Oprah has the potential to do far more for National Park awareness than even the 10-hour PBS mini series.
Rue Mapp is the youth investment program officer for the Stewardship Council, a California non-profit for the preservation of wilderness and the promotion of outdoor recreation to underrepresented communities.

“We know that women are the gatekeepers of experience for their families. So unless you get moms engaged and invested, getting people of color into the outdoors won’t be sustainable,” Mapp said. “Oprah getting out there camping as an African-American woman is showing that it’s possible. And that opening is what we need to further the dialog. I don’t care if she does it in stilettos. She out there doing it.”

The purists among us will likely scoff at Oprah’s camping adventure when it airs today. And many among us who relish the peace and solitude of the outdoors will likely rail against the notion of bringing more people into National Parks that seem already full to capacity. But the reality is that millions of people have little knowledge and even less appreciation for wilderness areas set aside for preservation. And as the U.S. population eventually shifts to a people of color majority it becomes more important than ever to engage a new generation of stewards with a vested interest in protecting these lands in the future. In our society that turns so readily on the impressions of celebrity perhaps it’s a media event like this that can make the difference.

“I basically believe what Oprah said to me when we parted,” Johnson said. “She said, ‘This is going to be huge.’ That’s what she does. She doesn’t do things on a small scale. And she didn’t get to be Oprah Winfrey by being wrong.”
We’ll see about that. Hopefully Shelton Johnson’s meeting with Oprah and the media attention that follows can begin a much-needed conversation.  Perhaps today, over the weekend, on Monday or sometime in the near future families across America will ask themselves, “How come we’ve never gone to a National Park?” That could be all it takes to begin exploring the possibilities.

By Frank and Audrey Peterman 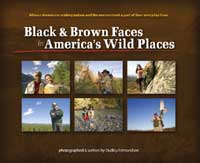 This story was created with the  support of Outdoor Retailer