Shane Phillips, 31, and his girlfriend Kassandra Fleury, 20, gave birth to an infant with special needs. Though covered by health insurance the young couple suddenly found themselves overwhelmed by astronomical medical bills they couldn’t pay.
“Our son Ryder was born with gastroschisis,” Phillips said. “That’s a condition where his small intestine is sticking out of the side of his body.”
With good prenatal care a routine ultrasound discovered a small tear in Ryder’s umbilical cord five months into gestation. A biophysical profile revealed his distended intestine protruding through the opening. Insured through Group Health Cooperative under her mother’s policy Kassandra was hospitalized two weeks in advance of her due date. Despite his serious condition Ryder was getting the care he needed for a successful delivery.
“But when he was born we went to all three hospitals in Madison within 48 hours,” Phillips said. “And with all that going on I got the first bill for something like $180,000.”
To put it mildly, access to quality health care is complicated. The intricate details of insurance coverage can often pose an impenetrable barrier between patients and the medical treatments they need to survive. Even those who currently have insurance can find it nearly impossible to effectively navigate their way through the convoluted system of benefits to which they are entitled.
Some in our community forgo seeking timely medical care out fear of their inability to pay. While others incur expenses out of pocket that would otherwise have been covered by insurance. But in Madison a non-profit public interest law firm called ABC For Health works to simplify the claims process. With services available to ailing state residents at all levels of income, the group provides free benefits counseling, a kind of check up, that eases navigation through the system, facilitates the delivery of care and speeds healing. 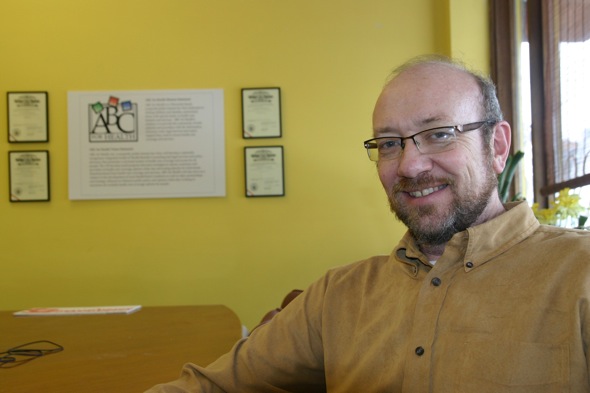 Kassandra gave birth at St. Mary’s Hospital on December 23rd. Ryder was immediately transferred to UW Hospital for emergency surgery. He was then sent to the neo-natal intensive care unit at Meriter Hospital. During this frantic ordeal Phillips believed all the while that Ryder was covered by insurance with his mother. But on January 1st when Kassandra’s mother changed carriers through her employer from Group Health to Physician’s Plus everything fell apart.
“They said they wouldn’t cover his treatment because it was a pre-existing condition,” Phillips said. “With everything it was going to cost us between $250,000 and $500,000.
But on the suggestion of a nurse at St. Mary’s Hospital Phillips contacted ABC for Health. Erin McBride, an attorney and insurance benefits counselor, came to the rescue.
“She was like an angel sent for us,” Phillips said. “She was really helpful and was really nice. Erin made it so we could worry about our son and not a hundred questions from the billing department.”
McBride became Ryder’s advocate. While maintaining the quality of his care, the attorney quickly cut through the red tape to find a coverage alternative. “Badger Care Plus was the perfect plan based on their income and the serious nature of Ryder’s condition,” McBride said. “Our job is to put the interest of the child first so the burden is on us to find a solution and not on the family.”
Attorney Bobby Peterson founded ABC for Health was in 1994. An offshoot of the now defunct Center For Public Representation, the non-profit firm operates out of the former storefront of the Mifflin Street Co-Op at 32 N. Bassett in Madison. Several lawyers offer a variety of services to help people, mostly low-income families and individuals, navigate through both public and private insurance programs.
“Oftentimes when you’re sick or you’re caring for a loved one who’s sick getting through it is difficult,” Peterson said. “And when you don’t make it through typically the consequences are you start getting bills. Medical debt mounts. And the end result sometimes is bankruptcy.”
ABC for Health specializes in providing information that will help avoid that worst-case scenario. Offering courses and training seminars throughout the state Peterson said his firm also aims to create a standard of practice in an emerging profession: the health benefits counselor.
“There are pockets of assistance out there, but it’s scattered across several different positions,” he said. “A social worker may do it. Patient billing might do it, maybe someone in (hospital) admissions. But there’s no collective place for this kind of expertise. ABC for Health has it.”
Currently St. Mary’s is the only Madison area medical center directly affiliated with ABC for Health. Hospital president Dr. Frank Byrne said despite a generous charitable treatment program, $7 million in 2008, he prefers getting his patients directly into an insurance program.
“If we can get them qualified for health benefits we then give them access to a system of care,” Byrne said. “There they can get ongoing assistance for their chronic conditions like asthma, diabetes, arthritis, and Parkinson’s disease.”
Byrne said studies conducted by the non-profit Rand Corporation show that people with health insurance are more likely to seek medical care before their cost of treatment escalates.
“In the long run that saves us money,” he said. “And the patient enjoys a much better outcome.”
Though in direct service to the interest of patients Peterson said ABC for Health helps to mitigate the costs of healthcare for providers as well.
“We’re trying to promote a change in what has always been considered provider responsibility and patient responsibility,” he said. “But when the two don’t meet up we miss an opportunity to help. They both loose, because the provider doesn’t get the bill paid and the patient slides into medical debt.”
But what really matters is the best delivery of care. After almost a month in the ICU and the intervening surgeries Ryder was discharged from the hospital, his medical fees covered by insurance. “He’ll have a little scar,” Shane Phillips, his father, said. “But other than that he’ll be just fine, a happy normal kid with the rest of his life ahead of him.”
This story originally appeared in the April issue of the Capital Region Business Journal philanthropy feature “Good Works”