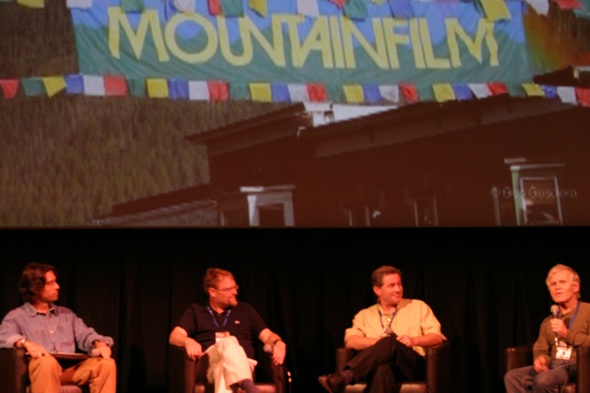 I’m sure it wasn’t just the altitude. Over Memorial Day weekend I nursed a raging headache at Mountain Film in Telluride. There was also a deep churning at the pit of my stomach that made me feel a bit uneasy. But at 9,000 above sea level I believe the symptoms I felt were less due to a lack of oxygen than it was the sudden and intense onslaught of complex ideas, passion stirring images and ire-raising conversations that are typically part of the Mountain Film experience. As passionate artists, athletes and activists come together to share their particular view of life on Earth, most who attend are roused to an emotional reaction they can feel in their hearts and minds as well as their bodies.
“With so much going on, the oils spill that just happened, climate change and the extinction crisis, I think we all felt it more intensely this year,” said Peter Kenworthy, executive director of Mountain Film. “Through all the films and speakers we cover a lot of issues that are very important to a lot of people who care deeply about the environment.”
Mountain Film is an event that really makes you think hard about the impact humankind imposes on the natural world. Sometimes it hurts. The very notion that the sixth mass extinction of species on the planet is the direct result of human activity is a tough idea to get your head around. Those like me with small underdeveloped brains can experience physical pain, a throbbing at the temples, just trying to process compelling and detailed information presented by some of the top minds in the world. 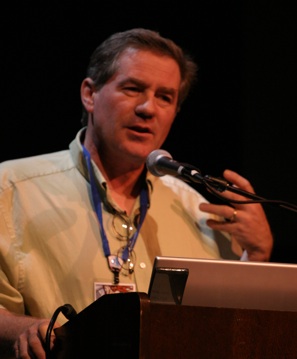 “We can’t take these complex issues any more,” said National Geographic Magazine photographer Joel Sartore. To put it simply he said during the Moving Mountains symposium on extinction. “We are the ‘Earth-eaters’ and we’re going to chew (everything) up with us.”
Our voracious appetite for energy and natural resources extracted from the Earth are making it difficult for many non-human species to survive. Increasing levels of carbon dioxide are warming the atmosphere melting the polar ice caps, causing seas to rise and making ocean water more acidic. Fish, amphibians and aquatic mammals suffer. Many die disrupting the food chain. Animal habitats and migration corridors are rapidly being destroyed as land around the world is developed for housing or stripped of its plant and mineral resources. More species die. 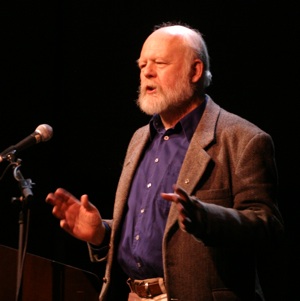 “The sixth great extinction has been going on for the last 50,000 years,” said Dave Foreman, co-founder of the environmental protection group Earth First. Referring to the ascendance of humans to the planet’s dominant creature he suggests that our history can be traced through the loss of species cut down in the wake of our progress toward civilization. As we continue to grow we’re pushing them out, depriving countless animal populations of the space, resources and time they need to survive.
“We can not stop the extinction crisis until we give the other Earthlings on this planet more room,” Foreman said.
It’s going to take action on the part of humankind to correct the problems our species as created. Programs like Freedom To Roam, lead by first American K2 climber and environmental activist Rick Ridgeway, work to acquire land and influence policy makers in order to preserve habitats and the pathways between them. Ridgeway’s goal is to encourage species diversity by maintaining the integrity of fragile ecosystems so often thrown out of balance by human industrial activity. 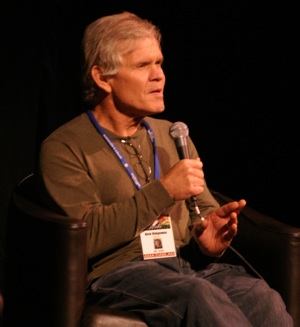 “I don’t want to leave this planet to my children only with species who have learned to adapt to us,” he once told me in an interview. “Weed species we see around cities like cockroaches, pigeons, rats, coyotes and sparrows will be all that we have left.”
Mountain Film offers both a prophetic vision of a future rife with doom as well as signs of hope for a bright future. Presented with artistically rendered films that illustrate the destruction of our planet, audience members are also shown stories of courageous men and women who work toward the protection and preservation animal species at risk around the world. 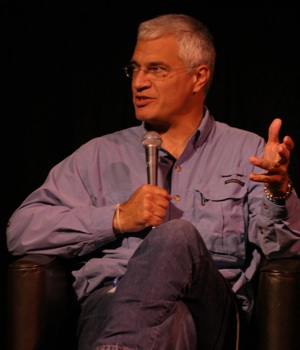 “We have to take action,” said Louie Psihoyos, director of the Oscar-winning documentary “The Cove.” We’re loosing animal species faster than we can record them.”
In his film Psihoyos leads an “Ocean’s Eleven-style” team of activists to infiltrate a secret facility in a Japanese fishing village where 23,000 dolphins are slaughtered every year. Capturing the deaths of these creatures on film, “The Cove” has brought this horrible tragedy to light while inspiring those who see it become better educated and aware of man’s cruelty to other species. Perhaps Psihoyos could inspire a new generation of environmental activist to take up the cause.
“We’re not just making a movie,” he said. “We’re starting a movement.”
That’s the power of the Mountain Film experience. More than just series of action pics set in exotic locales, the festival makes you uncomfortable to point of despair, even illness. Our passions roused, we are compelled by the stories of those brave enough to take a stand and reverse our path toward destruction. Entertaining to be sure, but the filmmakers and other artists at Mountain Film are advocates that craft a narrative of our times to demonstrate to those who watch how they might help change the world.
“As a journalist I never felt comfortable putting myself in the story,” Psihoyos said. “But with this movie I want to influence the news. I want to make people feel uncomfortable. You have to be part of the solution and not just report it.”