29 May Dust on Snowmelt – The Joy Trip Project 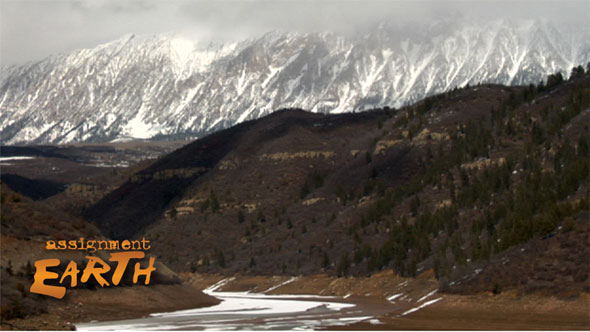 Dust that settles on high mountain ice will have a profound affect on the rate at which snow melts and flows into steams below. New research shows that light absorbing particles speed the transmission of sunlight to melt snow much faster than previously thought.
“The effect of dust both in and on the snow pack, particularly when it’s on the snow surface is to radically alter the energy balance on the snow surface by directly absorbing solar energy,” said Chris Landry of the Center for Snow and Avalanche Studies. “It really challenges the conventional wisdom that mountain snow melt is driven by air temperature. We’re able to show pretty definitively that the absorption of radiation by the snow pack can be the predominant driver of snowmelt.”
On the drive south to Telluride from Golden, Colorado I could see the brownish tent of dust on snowfields high in the Rockies. In town for the Mountain Film Festival I naturally thought about the impact of particle generating industries that were likely the cause of dust that collects along the range as high 12,000 feet.
Studies have shown that dust deposited by windstorms hundreds of miles away can increase the rate of sunlight adsorption by as much as 40 percent. In this addition of Assignment Earth we take a look at how these new findings will likely change to way water managers and farmers calculate the flow of snowmelt, the primary source of fresh water in many communities throughout the west.
MountainFilm makes you think about your life on Earth in a different way. This wonderful gathering at of artists, athletes and activists share their passion for the natural world and put into context the desperate decline of habitat on our planet. Writers, photographers and filmmakers present their particular view on the world and offer ordinary people the inspiration to prompt their action toward creating change that lasts.

Though there is very little I can personally do to reduce the amount of dust on snow in the Rockies, I can allow my awareness to be raised. Things such as this I must keep in mind while regulating my own consumption of precious resources like drinking water. As snow melts faster and becomes more scarce it becomes more important to exercise conservation and curb my personal use.