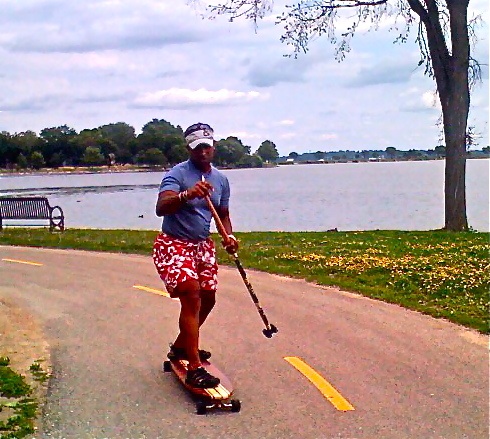 With five navigable lakes Madison is a perfect city for paddling. Before the ice settles in for the long winter, canoes and kayaks dot the waters on either side of the Isthmus right off the Capital Square. But lately there have been sightings of an adventurous few who have taken their paddling on to local bike paths and sidewalks. Riding skateboards instead of boats they’re trucking down the road using the Big Stick land paddle from Kahuna Creations.
“I’ve ridden skateboards for years,” said Brad Werntz, a local land paddler. “But the Big Stick makes it a lot more accessible and easier to get around. It’s like having your own moving sidewalk. It’s fun and puts a smile on your face.”
Imagine an extra long skateboard. But instead of kicking for propulsion the rider uses a long pole. The Big Stick land paddle has two round hard-rubber pads that connect with ground. Plant both feet on the board, bend your knees and drop your center of gravity. Take a few strokes like you’re paddling a canoe and it’s easy to pick speed.
“All you really have to do is stand,” Werntz said, “The Big Stick makes it so you don’t have to make that stand/kick transition that can make you unstable on just a skateboard with out it. I’ve gotten my 70-year-old aunt and my 3-year-old nephew on a board.”
The stability advantage of the Big Stick might get people who have steered away from skateboarding to give it try. The long board itself is a solid platform. But add in the Big Stick and you make it a reliable vehicle. 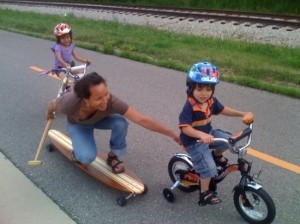 “It’s possible to ride with kids. I can take my 6 and 4-year-old all over town,” Werntz said. “You can’t do that and kick with a little one holding on to your back leg.”
The Big Stick takes skateboarding to a whole new level. While combining it with the fun of paddling it brings a childhood pastime back within reach of active adults.
“ It’s a gas. I stepped on that board and I was 14 again,” said Darren Bush owner of Rutabaga, a local paddling shop.  “ It the closest this I can think of to snowboarding or surfing on concrete.”
Going downhill it’s simple to carve wide turns. Use your hips, core muscles and the muscles of your lower extremities to steer.  The Big Stick not only reduces the risk of falling but it can be used as a break to control your speed.
“You’re having such a good time you don’t realize which muscle you’re using,” Bush said. “By the time you’re done you get off and discover you just had a great workout.”
Bush said land paddling is good cross-training for stand-up paddling. “You use the exact same muscles and you go lot faster,” he said. “And they’re not real expensive. You can get a stick and a board for about $300 and that’s all you need.”
A helmet is recommended, just in case. Kneepads might be a good idea as well. But with minimal instruction and an ounce of enthusiasm you can be off and rolling in no time.
[youtube]0mmw25IO2so[/youtube]