20 Oct The Yes Men do it again! – The Joy Trip Project

It was all an elaborate hoax. The idea was  to embarrass the U.S. Chamber of Commerce to do what many believe is the right thing: stop lobbying against The Clean Energy Jobs and American Power Act. This bill proposed by Senators John Kerry and Barbara Boxer aims to curb industrial pollution while creating green collar jobs in the production of renewable energy. Apparently Bichlbaum wanted to point out that the Chamber of Commerce is one of the bill’s leading opponents. 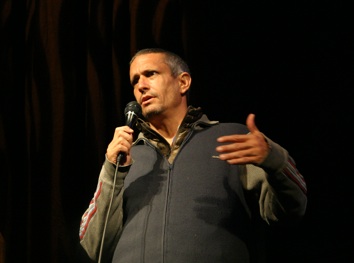 As he has on several occasions, Bichlbaum and his crew known as The Yes Men appear as the invited guests of some prestigious organization. A few years ago posing as a spokesman for Dow Chemical he was asked by the BBC to declare on international television the company’s intention to pay billions of dollars to clean up one of the worst industrial catastrophes in human history. The 1984 Bhopal, India disaster claimed the lives of 8,000-10,000 when toxic chemicals were released from a Union Carbide pesticide plant now owned by Dow.   Another 25,000 have since died from gas-related diseases.

In a BBC interview that aired around the world Bichlbaum  claimed the company would take full responsibility for the destruction caused by its subsidiary and make restitution to the victims and their families.  Dow’s stock price plummeted within hours of Bichlbaum’s announcement. Again, it was just a hoax.

This and other intricately executed schemes are played out in the film The Yes Men Fix The World. I had the pleasure of meeting Bichlbaum and caught his flick back in May at the Telluride Mountain Film Festival. As much social commentary as side-splitting entertainment the movie is a modern day tale of individuals hurling small rocks to bring down corporate giants. Monday’s prank conference at the National Press Club didn’t carry the weight of previous Yes Men hoaxes, but it serves to remind us that individuals acting with conviction can speak truth to power and perhaps make a difference. -JEM

After the event The Yes Men issued the following statement:

WASHINGTON, D.C. – In a dramatic announcement at the National Press Club today, the U.S. Chamber of Commerce reversed its position on climate change policy, and promised to immediately cease lobbying against the Kerry-Boxer bill.
Not.
Within minutes of the announcement, it was revealed that the “Chamber spokesperson” was an impostor, and the press conference an elaborate hoax designed by activists to draw attention to the U.S. Chamber of Commerce’s fight against public interest on climate change. At the close of the news conference, real Chamber of Commerce spokesperson Eric Wohlschlegel barged into the room visibly rattled, and declared the event a fraud.
The stunt was pulled off by the Yes Men, the activists best known for posing as corporate executives in order to reveal how corporate greed negatively influences public policy. Recently, the Yes Men have focused their attention on the urgent need for action on climate change. Today they sought to reveal–and repeal–relentless corporate lobbying of elected officials aimed at derailing domestic climate legislation and a much-needed global climate accord.
[snip]
At the end of [fake U.S. Chamber “representative” “Hingo Sembra”]’s remarks, Eric Wohlschlegel confronted Bichlbaum. In the stand-off, both accused the other of being a fraud and disrupting business as usual. The standoff ended with Wohlschlegel dispensing his business card to reporters in the room, and attempting to field a number of pointed questions about the Chamber’s real stance on climate legislation currently in Congress, which the real Chamber opposes.