Posted at 10:35h in Commentary, Quote of the day by James Edward Mills 4 Comments 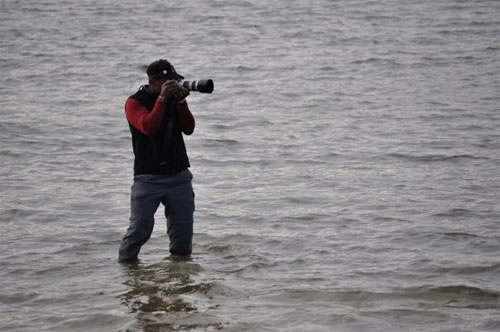 “I believe that (anyone’s) life will be filled with constant and unexpected encouragement, if he makes up his mind to do his level best each day, and as nearly as possible reaching the high water mark of pure and useful living.”

Booker T. Washington ~ American educator and reformer, first developer of Tuskegee Normal (1856-1915)
Photo by Christine Lucas
I should be packing my bags for an 850-mile Joy Trip. Flooding in Atlanta have me a bit nervous to make the drive. I’m afraid this photograph is a precursor of what lies ahead.  I’m not sure what to expect. But that’s what makes it an adventure. I’m heading to the “Breaking the Color Barrier to the Great American Outdoors” conference, perhaps into to deep water. And I’m going to try hard not to pick a fight.
Our country has firmly decided not to talk about race. Even though we have a president who was “black before the election,” as Obama stated last night on David Letterman, we still have a long way to go before our conversation on the disparities among blacks, Latinos, Native Americans, Asians and all other ethnic minorities has concluded. The conference I am headed to in Atlanta aims to address a few of the issues that people of color face as they express their relationship with the natural world, as they venture out to wild and scenic pace to play. Though there are no physical barriers that prevent anyone in this country from enjoying recreation in our national, state or local parks, there are cultural and psychological obstructions that keep large segments of our population confined to the urban centers. I have a problem with that.
I know this to be true only from my personal experience. Despite having forged a career in the outdoor recreation industry that now spans 20 years I have witnessed small even subtle instances of institutional racism that keep more people who look like me from going out into the wild. Everything from popular magazines that show few people of color enjoying the outdoors to editors who claim categorically that “black people just aren’t our demographic.” And no major manufacturer of outdoor  equipment that I am aware of can claim to sponsor a single African-American athlete. If I’m mistaken please let me know. That’s a story I’d love to tell.
But I get it from both sides. There are African-American publications who have stated “our readers wouldn’t be interested in stories like that.” Or “If there’s no celebrity hook we’re really not interested.”
So what choice do I have? Do I just drop this and not make race an issue where it concerns outdoor recreation? Or do I keep pushing this agenda and try to raise what awareness I can, all the while potentially alienating myself from companies, institutions and individuals I have known and worked with for years. Shall I call them racist? I suppose I don’t have to necessarily pick a fight with incendiary works to make the point. But I can no longer participate in this conspiracy of silence that encourages us to be “color-blind” and buy cop-0ut of letting people play according to their social and cultural predispositions.
Well I believe there is color-blind and then there is color stupid! To suggest that race does not play some role in how or whether people of color engage in outdoor recreation is missing the critical point that in a free society everyone would engage in all activities at rates directly proportional to their percentage of the population. If that is not happening there are factors at work preventing it from happening. I want to discover what those factors are.