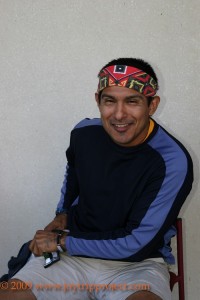 It’s eight hours after the conclusion of the Wisconsin Ironman Triathlon. And on the streets of Madison all that remains is a litter of paper cups and discarded plastic water bottles. <<Cross fade sound of leaf blower>>
A city maintenance man sweeps up the clutter with a leaf blower in front of the State Capital building as the 2009 Triathlon season for many comes to an end. But 50 yards away at the Monona Terrace the 2010 Triathlon season is just beginning. 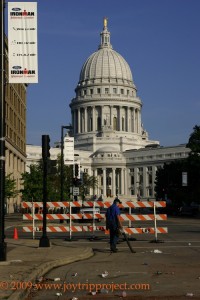 Jose Aguilar was the very person to get in line for next years’ Ironman. When did his triathlon training begin?
Aguilar_001
About 11PM last night
While many of this season’s triathletes were still crossing the finish line Aguilar and several others were getting into position for a spot in next year’s race. The Ironman training begins long before race day
Aguilar_002
The way it works, they let the volunteers register first. And then when they’re done, the general people register. And then when this process is done, they open registration online.
By 8AM the line to register is wrapped around the lower level of the Monona Terrace in two directions. Volunteers who helped the day before get first dibs on the coveted positions. Aguilar, a massage therapist from Chicago, camped out over night to better his chances. 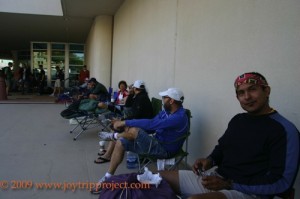 Aguilar_003
I’m a little worried now. They said there were 3,000 volunteers yesterday. It almost looks like they’re all here.
The Wisconsin race is one of the popular triathlons in the Ironman series. Athletes from across the United States and around the world come each year to swim 2.4 miles on Lake Monona, ride 112 miles through the Dane County countryside and run 26.2 miles a full marathon along the streets of Madison 140.6 miles in all.
Aguilar_004
I’ve done several other Ironmen before and I hear a lot of good stories about this course, particularly the bike segment, how technical it is, how challenging it is. And also the crowd on the run, they’re pretty intense. 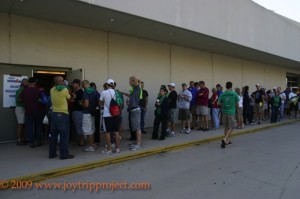 The exciting event inspires professional and amateur athletes alike to commit a lot of their time and energy to getting ready. Nathan Chandler also from Chicago was second in line behind Aguilar. He says Ironman isn’t just a one-day race.
Chandler_001
Half the battle of Ironman… it’s a physical battle obviously, but it’s also a mental battle. So you know if you can do the training you can probably do the race. But the training is the race.
So for everyone standing in line their Ironman training starts now. Beginning a year in advance their race-day preparations will be the end result of decisions they make today. But Chandler says it’s important to keep in perspective the cumulative 140.6 miles combined swim, bike and run is a process you have to take one day at a time.
Chandler_002
You can’t look too far in advance. You know I’ve learned you have to keep short-term goals. And meet those short term goals. So you’ve got to forget about the 140.6 and worry about the weekly training goals.
Fortunately Chandler has a solid training partner in his sister Kristin Reingruber. She says sharing the goal of an Ironman finish will keep them both on track.
Reingruber_001
It helps to have that extra person. You can call somebody to go on a bike ride. You don’t have to go out a ride 100 miles by yourself. It helps to have that training partner. So I think if we can do stuff together a little bit hear and there it will help us both, both of us stay motivated.
David Craig a Madison insurance salesman said training with a partner helped to get him through his first season to complete a shorter race.
David Craig_001
When I finished my half Ironman. I decided this Ironman thing was possible.
Motivated now to do the full race in 2010 Craig put his time in this year as a volunteer to secure his spot for next September.
David Craig_002
So that’s how I got into it. Of course being a part of it and seeing it and all that other stuff just go me excited.
Kristine Korevec is a five-time Wisconsin Ironman triathlete. Even though she qualified for the race in Kona, Hawaii next month She signed on this year as a volunteer.
Kristine Korevec_002
This race is the best day of the year for me. I think it’s so much fun out there and the people you’ll meet along the way and just the journey is incredible.
Those who arrived early to register will likely have a spot in next year’s race. With a head start of several hours aspiring Ironmen like David Craig who volunteered have a big advantage over     those planning to sign up online.
David Craig:
I hope so. I texted my wife this morning and said it looks like I should have gotten here earlier.
If you’re planning on participating in the Wisconsin Ironman you might want to plan on signing up as a volunteer next year and try for 2011.
For the Joy Trip Project, this is James Mills.