On the passing of Ted Kennedy – The Joy Trip Project

Posted at 06:30h in Quote of the day by James Edward Mills 8 Comments 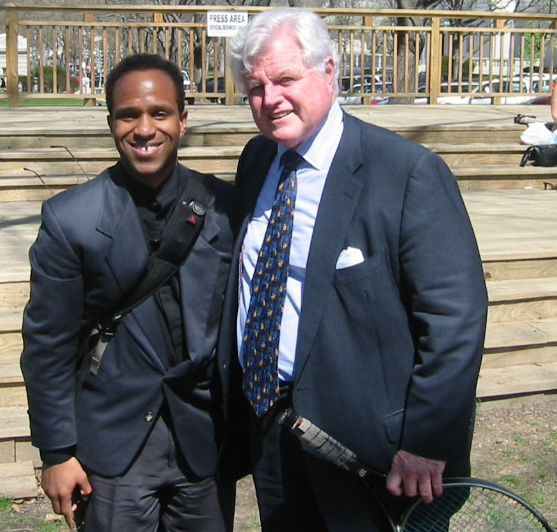 “Let children walk with Nature, let them see the beautiful blendings and communions of death and life, their joyous inseparable unity, as taught in woods and meadows, plains and mountains and streams of our blessed star, and they will learn that death is stingless indeed, and as beautiful as life.”

Several years ago, I walked past the U.S. Capital Building in Washington D.C. I recall it was a beautiful spring day. The magnolia and cherry trees were in bloom as I strolled the grounds with my camera taking pictures.
Suddenly a tennis ball bounced and rolled past me as two black dogs with short curly hair charged after it. I thought they were poodles. But I would later learn that they were Portuguese Water Dogs, the same breed now adopted by the first family of the United States. Perhaps they’re cousins.
I looked to see where the ball came from and I saw a large man in a charcoal grey suite with a shock of white hair holding a tennis racket. Behind him there were fit looking men in conspicuous dark sunglasses scanning the immediate area for trouble. The man they guarded was Ted Kennedy.
Right away I started taking pictures. Back then I had Canon digital point and shoot with a nasty shutter lag. So I didn’t take many. As I stood there the dogs wrestled and chased at one another around my feet as Kennedy came toward me.
“Sorry about that,” he said. “They’ve been cooped up all day and need some Exercise.”
“It’s OK,” I said. “I have two of my own. Do you mind if I take your picture?”
“No not at all,” Kennedy said. “Maybe we can get this lady to take one of us together.”
I handed my camera to a woman who stopped to admire Kennedy’s dogs. Looking back on this moment I can’t believe I didn’t take a single shot of them too!
Once the picture was taken I stood there trying to think of something to say. My mind was flooded with images of his family and the legacy of service the man before me represented. I saw in my head newsreel pictures of his brothers John and Bobby, both killed a few years before I was born. I thought of my own family, my mom and dad, who made it through the 1960s Civil Rights era due in part to the sacrifices the Kennedys made for the sake of disenfranchised African-Americans across the county. What could I say?
So before he turned and walked away I shook his hand. I said simply, “Thank you.” Somehow I could tell he knew I didn’t mean for the photograph. -JEM