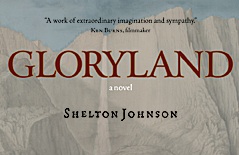 From Emancipation Day through the first decade of the 20th century, Gloryland spans the arch of freedom. In his premiere novel veteran National Park Service ranger Shelton Johnson chronicles the path of an African-American man born mere hours after the abolition of slavery at the end of the Civil War. Narrated by lead character Elijah Yancy the story unfolds in the years that follow to track his life’s course to become empowered by the liberty to be found in service to his country and communion with nature.
Fleeing the racial violence and social unrest of the reconstructing South, Yancy traveled west to enlist in the U.S. Cavalry. Through his journey Johnson reveals the often forgotten story of free African-American horsemen who battled the Plains Wars and became known by the Indians they fought as The Buffalo Soldiers.
In a series of snapshot moments throughout the history of the Buffalo Soldiers Yancy appears in Gloryland to apply emotional context to the experience of thousands. From their military service in the Philippines and Cuba to their deployment to patrol the newly designated National Parks of Yosemite, Yellowstone and Sequoia, African-Americans played a pivotal role in protecting the freedom we enjoy today. In Gloryland Johnson defines the legacy of their service that was instrumental in the creation of our National Parks and endures through the present to inspire future generations.~JEM
Gloryland is published by The Sierra Club Books and is available for purchase online at Amazon.com