Posted at 10:31h in Commentary by James Edward Mills 6 Comments

It just wasn’t going to happen. Shamane and I turned the newly built chair every-which-way, but there was no getting it up the stairs and through the narrow door from the basement.

“I hate to tell you this hun,” she said. “But I think you need to take the arms off.”
My wife is every bit as smart as she is beautiful. Twelve years of marriage has taught me not to argue. Repeatedly muttering a single syllable expletive, I backed us down the steps and skulked over to my workbench. The precision Japanese handsaw I cherish would make quick work of this.
After two solid weeks on an extended Joy Trip I spent my first Saturday at home building an Adirondack chair. The simple but classic design is a one-day project I could knock out in 8 hours from first cut to finish. The practice of woodworking is a wonderfully active meditation that frees the mind while transforming thought into reality. Ironically, the creation of this comfy lawn chair was a roundabout way of settling my overloaded brain to contemplate and then report on the many adventures I discovered in my recent travels.
Since my earliest training back at Berkeley my instructors and student colleagues warned of becoming an armchair anthropologist. Without reservation we shunned those who conducted research in the science of human behavior from the comfort of their laboratories or the library. Worse perhaps were those who sit prattling on and on about their once great findings of the distant past told as adventure stories, safe in a plush wingback. The very thought of becoming that kind of douche bag usually brings me up short and makes me desperate to get my facts straight. The goal is to be an active participant and not merely an observer of the issues about which I write, to be more than just an armchair adventurer.
Reporting like anthropology is storytelling. Though writing in a seated position I aspire to bring you stories that are interesting, compelling and accurate. Derived from my personal point of view while traveling I hope these stories give you a little perspective into the lives of those I meet, people who have actively engaged themselves in outdoor recreation, environmental conservation, acts of charitable giving and practices of sustainable living. I hope that from the stories I share you can draw your own conclusions and perhaps learn something from the characters I encounter that might help to inform your own life’s journey wherever you might be headed.
Me, I’m just casting about trying to find some direction. Over two weeks I drove 3,000 miles to connect with dozens of amazing people who have written books, produced films, created works of art or physically guide others through adventures in the natural world. Professional kayaker Corey Volt patiently taught me the finer points of rolling a boat through whitewater in Golden Colorado. 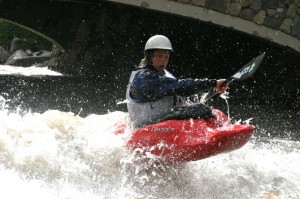 “Remember kayakers are the laziest people in the world,” Corey said. “Use as little energy as possible to pull the paddle through the water. Don’t just use your arms. Use your whole body.”
Total emersion, the perspective of life from ground level offers infinite clarity. While connecting with people directly who are passionate in their work it’s possible to glean true understanding of the characteristics that make them successful at what they do.
“I produced the shit out of that film,” said Tony Mark maker of the 2009 Academy Award-winner for best picture The Hurt Locker. “I had a great script and really made the most of it. We could talk for 10,000 hours and I’d never know anything about you or your life. Good writing, a good script makes your story come alive.”
When I had the chance to talk to Mark over cocktails at the Mountain Film Festival in Telluride I naturally had to ask him what made his movie a better picture than the blockbuster Avatar also up for an Oscar for the best movie of the year. 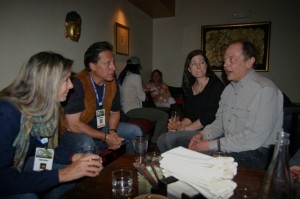 “Don’t get me wrong. I loved Avatar. It was an amazing visual spectacle,” he said. “But the Hurt Locker was a different kind of film. It’s real. I didn’t set out to make a movie about the war. I didn’t come down on whether it was good or bad, whether or not these guys are heroes. I just wanted to tell a story about four guys in a bad situation doing a really tough job and doing it very, very well.” 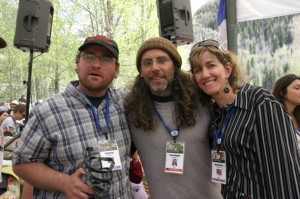 That conversation set the tone for the days that followed. At Mountain Film I watched a number of movies that conveyed the passion not only of the characters, most real people and not actors, but the filmmakers themselves.  Suzan Beraza’s film Bag It tells the story of the harm that plastic is doing to the environment and the general health of human beings around the world. The movie I Am by director Tom Shadyac leads viewers on a personal odyssey through the American dream that explores our patterns of over consumption and penchant for selfish behavior that’s ruining the planet.
First Ascent: The Point of No Return is a gripping documentary from Mark Rosen and Peter Mortimer of Sender Films. This made-for-TV movie shares the final days of climbers Jonny Copp, Micha Dash and cameraman Wade Johnson, all of whom perished while on expedition in an avalanche last year in China.
“It wasn’t the story to begin with…it turned out quite different,” Rosen said. “When we went to China to recover their bodies and all their belongings we ended up finding this huge trove of footage that Wade Johnson had shot. When we looked at it we saw that Wade had recorded this amazing document of this expedition, this adventure they were on… Almost begrudgingly we decided to make a movie of their lives and their deaths.” 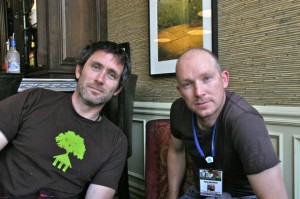 As each story unfolded, those shared on the screen and others recounted interview, I found myself both inspired and overwhelmed by the raw human emotion behind these talented artists. Taking on issues and adventures with dire mortal consequences ordinary people discover and accomplish amazing things that put into context for those of us who sit and watch lives of great substance and intrinsic value. Their stories prompt us up from our armchairs, off our butts and into the fray, convinced that nothing in the world will change unless we ourselves take action.
The arms came off the Adirondack chair with long steady strokes of the Japanese handsaw, two neat piles of sawdust on the basement floor. Up the stairs, through the narrow doorway, into the kitchen, onto the patio and then the lawn, the chair now sits. And so do I. My armchair adventure continues, writing accounts of people engaged in the business art and culture of the sustainable active lifestyle. My job, the role I’ve assumed in the world of adventure, is to tell their stories and whenever possible, every day, aspire to live by their example.
I’ll get wet, dirty, go hungry, suffer the cold, at least for a few hours. I’ll climb, ski, paddle, mountain bike, but never really risk my life. That’s not the point. The example I am to emulate is much more daunting than that. I aspire to live actively engaged in the world around me, recognizing the impact my very existence has on the planet and my fellow human beings. The adventure lies in getting off your butt and making better lifestyle choices that not only maintain your health and well-being but also conserves energy, minimizes waste and reduces environmental pollution.
Over the next several weeks I’ll roll out a number of interviews and film reviews collected from this most recent Joy Trip. I hope you’ll follow along and share the stories I’ve discovered with your friends. Perhaps you’ll be inspired as well.  -JEM 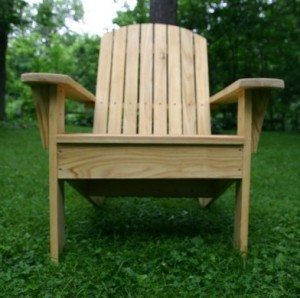