I first met Shannon Galpin in 2007, about a year after she created her non-profit Mountain 2 Mountain. Hoping to find a common bond between the alpine culture of her home community in Breckenridge Colorado and rugged the high altitude provinces of Afghanistan she works to create empowerment opportunities for women and girls to help them lead better lives through education, family planning and economic development. Shannon’s efforts throughout this often volatile conflict zone have done much to demonstrate the impact that one person can make to improve...

Following up her 2012 "Streets of Afghanistan" project social activist Shannon Galpin has launched a new initiative to raise awareness for the plight of women and girls in Central Asia. Afghan Dreamers is a new book now in production with the help of Make Stuff Sharp that aims to further incorporate art as a powerful vehicle of change meant to transform one of the most violent and politically charged regions of the world. "Art has a power to reach people viscerally in a way that other work doesn't," Galpin... 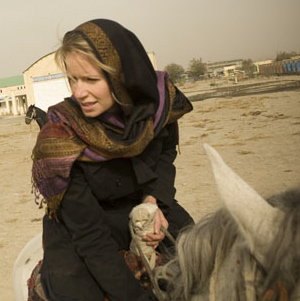 In her travels through Afghanistan the locals call Shannon Galpin the blond, blue-eyed infidel. At 36 this mountain bike racer from Breckenridge, Colorado makes her way through active war zones waging peace. As the executive director of her own non-governmental organization called Mountain 2 Mountain Shannon works on behalf of vulnerable women and children caught in the crossfire. “Our focus is to look at women in Afghanistan as beyond the victims but as the solutions and as the agents of change, “ Shannon said “and that these women that we are trying to work with through education and training are truly the solutions for the country.” Afghanistan has been a place of violent conflict for more than 40 years and with U.S. Troops on the ground now for almost a decade ordinary people, with no special training like Shannon are getting involved trying to find a peaceful solution. “I started traveling over there two or three years ago. I have spent time living in the middle east,” Shannon said. “I lived in Lebanon and traveled throughout the Middle East for a couple of years and I have always connected with the regions that have the worst human rights, that have the worst gender equity rights.” A single mother with a daughter at home Shannon is like many American women frustrated with the plight of people here at home and half a world away who suffer largely because of their gender. “What I realized was that I was ranting a lot and I was upset about it, and it was old adage of be the change that you want to see in the world,” Shannon said, and instead of complaining I should just get off my ass and do it.”
3 Comments
Continue Reading
0 Likes
Share
Loading Comments...